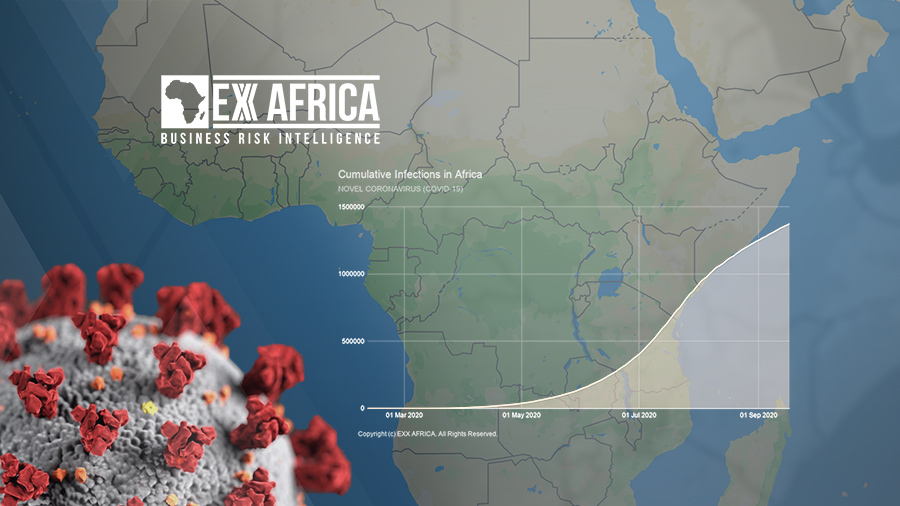 After the first case of COVID-19 was reported in Africa on Valentine’s Day, many feared the worst for the world’s least developed continent. While many challenges lie ahead given the possibility of a second surge with associated lockdowns, Africa has largely weathered the first stage of its pandemic response well. Indeed, early indications suggest that Africa is now past its peak. We look at some of the countries that have performed best so far.

Six months ago, as countries outside of China started to see their number of COVID-19 cases climb, many thought Africa would become the next high-risk area. The predictions were dire. Home to many of the world’s least developed healthcare systems, the death tolls were predicted to be astronomical whilst the economic outlook for the continent as it dipped into recession for the first time in 25 years was forecasted to wreak unprecedented havoc.

However, in many ways, the African continent demonstrated stellar leadership and robust decision-making that relied on a science-based approach to curb the spread of the virus and ultimately the impact on local communities. The World Health Organisation (WHO) indicated in early September, for example, that Africa may indeed have passed its peak. Similarly, while all African countries have felt the economic weight of the virus, some countries have been able to weather the economic storm better than others, offering renewed hope for a stronger recovery next year.

Naturally, as many African economies have started to open up, these gains run the risk of being reversed and continued careful management of the virus is required to prevent a new surge with associated lockdowns. For the time being, we acknowledge some of the unsung heroes from this first stage in the fight against COVID-19.

Mauritius has been hailed as an African success story in its management of COVID-19. At the time of writing, the Indian Ocean Island had recorded just 366 cases of the virus and 10 deaths, with its last death reported on 27 April. This island is also one of the few places in the world that has not had a locally transmitted infection in more than five months: All new cases have been imported and have been detected during the screening of new arrivals and during quarantine.

While another Indian Ocean Island, the Seychelles, has reported fewer numbers than Mauritius – with 141 cases and zero deaths– what makes the Mauritian story so successful is its robust testing strategy. Having conducted 239,204 tests, it has conducted the highest number of tests per million population in Africa to date. Mauritius has also benefitted from a strong central government, a well-funded healthcare system and a containment strategy characterised by widespread testing, contact tracing and quarantine measures.

However, while its management of the virus is exemplary, the pandemic has dealt a heavy blow to its economy – primarily through the collapse of tourism. As a result, Mauritius’ economy is likely to shrink by a record 13 percent this year and the national airline, Air Mauritius, has been placed under voluntary administration (to read more on the economic threats facing Mauritius, see here: MAURITIUS: TAX STATUS UNDER THREAT AS COVID-19 IS LARGELY DEFEATED).

The challenge for the island now is how to reopen its economy safely. Some of the measures Mauritius is taking include fitting the airport with a laboratory testing centre to test visitors upon arrival. In addition, authorities are considering classifying tourists according to the length of their stay where travellers who come for a week could be restricted to staying inside their resort. Some international travel is expected to resume from 1 October.

Rwanda is another COVID-19 success story in Africa. With 4,653 cases and 23 deaths at the time of writing, Rwanda falls in the bottom half of positive cases per million population in Africa. What stands out in Rwanda however, is its effective management of the virus.

The small landlocked nation took an early and strong approach before even reporting its first case in the country with airport screenings as early as January 2020. As a low-income country, the odds were ultimately stacked against it but Rwanda was able to effectively make smart use of its scarce resources to respond to the virus with a strong focus on testing and contact tracing. In large part, Rwanda benefited from the procedures, equipment and knowledge it acquired when dealing with malaria, hepatitis, and the threat of Ebola from the neighbouring Democratic Republic of Congo. So robust was Rwanda’s early response to the virus that it was one of the first countries globally on the EU’s non-essential travel list and the only sub-Saharan African state to make the cut. 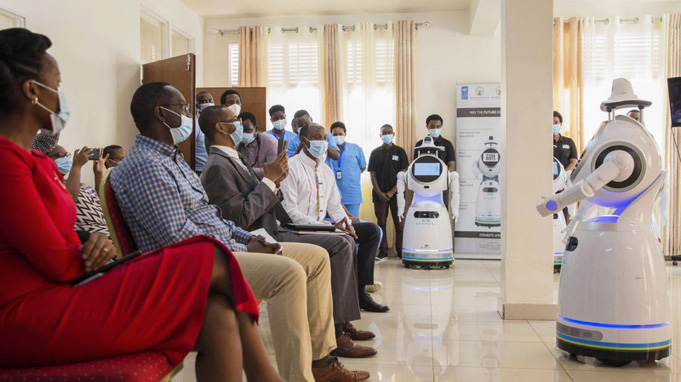 Robots, donated by the UNDP and the Rwanda Ministry of ICT and Innovation, assist in screening people for COVID-19.
Source: Cyril Ndegeya/Xinhua News Agency/Getty Images

Rwanda’s economy is also expected to fare better than most this year. Its economy was already on a solid growth trajectory before the arrival of COVID-19 in March, growing at an annual average of eight percent, with the IMF predicting that growth could remain or improve to 8.5 percent in 2020 and 2021. While COVID-19 has pushed this year’s forecast down to 3.5 percent, the country will be one of the few states achieving positive growth this year. The country has also benefitted from significant funding from abroad to weather this storm, receiving USD 109 million from the IMF under its Rapid Credit Facility, USD 14 million from the World Bank, USD 1 million in the form of aid from the US, and a USD 56 million grant from the EU.

Indicative of this positive outlook, Fitch Rating’s latest assessment of Rwanda forecasts a return to “strong GDP growth and fiscal consolidation consistent with stabilising government debt/GDP” in the coming months. This will enable Rwanda to absorb the adverse impact of the pandemic well over the next 12 months (to read more on Rwanda’s sound handling of the virus, albeit with political concerns, see here: RWANDA: REGIONAL TRADE TENSIONS AND FAST RISING DEBT RAISE ECONOMIC CONCERNS). 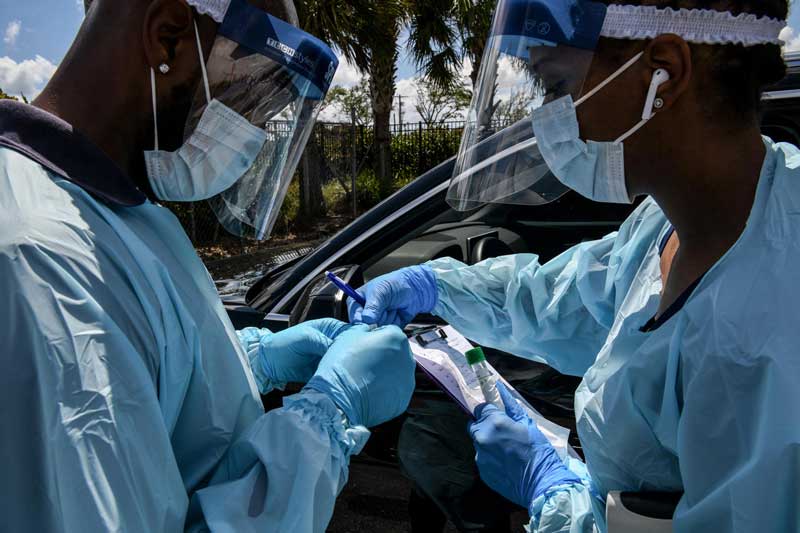 Senegal is another African country that has received international recognition for its handling of COVID-19. Much like Rwanda, the challenges were stacked against this West African nation given its fragile healthcare system and scarcity of hospital beds and doctors, with about seven doctors for every 100,000 people the country. However, more than six months into the pandemic, and it has registered 14,618 cases and 300 deaths. As a result of its “high degree of preparedness and a reliance on facts and science”, Foreign Policy Magazine has even ranked Senegal 2nd place in an analysis looking at how 36 countries have handled the pandemic. Senegal came second only to New Zealand.

This West African country’s growth prospects beyond COVID-19 also remain highly favourable. Prior to the pandemic, GDP growth was averaging about 6.5 percent over the last six years and growth was again expected to soar to 6.8 percent this year. As with all other countries, COVID-19 has dropped growth prospects to around 1.1 percent this year but the pushing ahead of its growth strategy, the Emerging Senegal Plan, which received IMF support earlier this year is expected to help boost growth at home. The expected return of the services and agricultural sectors next year, the two largest drivers of the economy, is further anticipated to help lift Senegal out of this slump in the medium term whilst revenues from oil and gas projects are likely to come online in 2025 (for more on Senegal’s performance during COVID-19, see: SENEGAL: HOLDING FIRM AMID COVID-19 STORM)

Even African countries that have reported amongst the highest number of cases across the continent have weathered COVID-19 relatively well. Egypt stands out in this instance. While this North African country recorded the first official case of the virus across the continent on 14 February 2020, and trailed South Africa’s high case numbers for many weeks, today the country has recorded just 101,641 cases and 5,715 deaths. This stands in stark contrast to South Africa’s 653,444 cases and 15,705 deaths. It is worth noting however that at the start of the pandemic various reports emerged that Egypt may have been falsely reporting the extent of its virus (See: EGYPT: IS THE GOVERNMENT COVERING UP A MASS COVID-19 OUTBREAK?).

Nevertheless, Egypt was able to successfully open its economy during the summer months allowing daily life and indeed tourism – a much needed lifeline – to resume in the country. Between July and August alone, Egypt welcomed over 120,000 tourists to over 600 hotels that met safety protocols. This, along with other measures to stimulate the economy, could mean that Egypt is one of the few major emerging markets globally to maintain its positive GDP outlook despite COVID-19 and its economic impact this year. It is estimated that growth could reach two percent this year, down from 5.6 percent in 2019, with a modest increase of 3.3 percent in 2021. 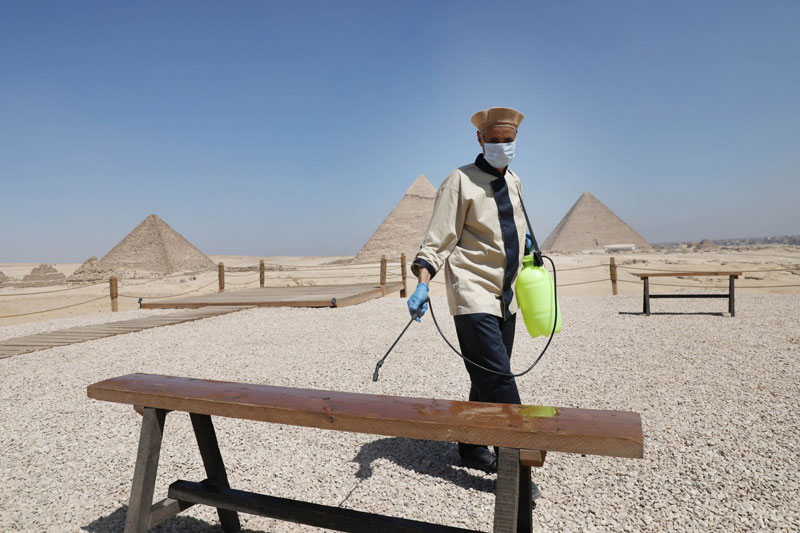 Egypt also appears prepared for a potential second wave. This week its Health and Population Minister outlined a specific action plan – divided into four key areas – for a possible second wave of coronavirus. These areas include increasing healthcare capacity, creating reserves of medical supplies, denying entry into the country for visitors without a negative PCR test and establishing easily-accessible quarantine areas in hospitals, and producing and distributing a vaccine. On this last point, Egypt has chosen to partner with a Chinese company for the development of a vaccine and has reserved 30 million doses of the vaccine developed by AstraZeneca and the University of Oxford in Britain.

A number of African countries have fared well in this first stage of the response to COVID-19. By following science, learning from their global counterparts in the northern hemisphere, and responding swiftly and decisively, many countries have managed to escape much of the dire outlook forecasted in the beginning of the year. Indeed, there are signs that the continent has passed its peak: In early September, the African Centre for Disease Control noted that over the past four weeks, there had been an average 10 percent fall in the number of weekly new cases across the entire continent. However, questions around a lack of testing continue to cloud this assessment.

Nevertheless, many African countries are now entering their next test. As economies open up further and international travel resumes, it remains to be seen whether the continent will be able to fare just as well with ‘living alongside the virus’, social and economically, as it did during lockdown. Even the countries listed in this report are likely to face new challenges during this next stage, particularly those classified as low-income. Moreover, many other countries are likely to face even more hardships during this next and crucial phase (for an assessment of which countries are most vulnerable to COVID-19 in terms of country risk, see here). 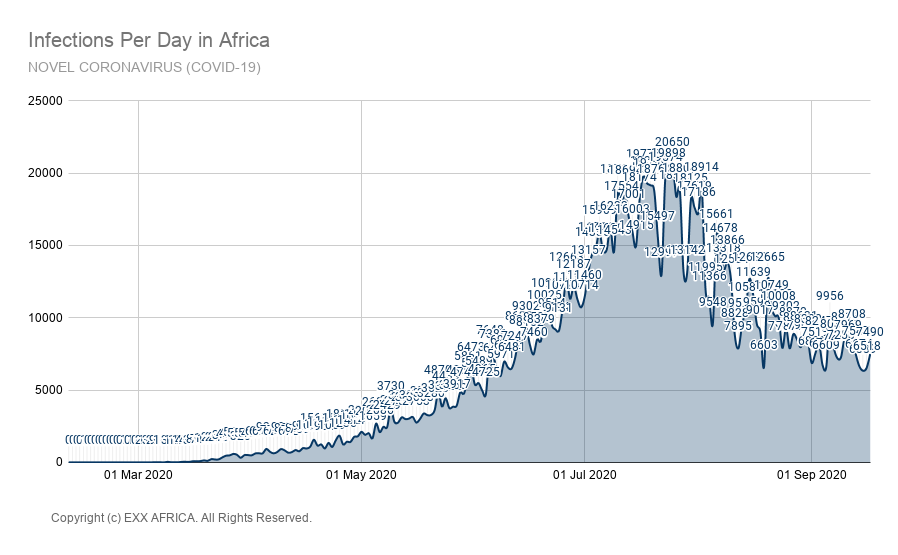