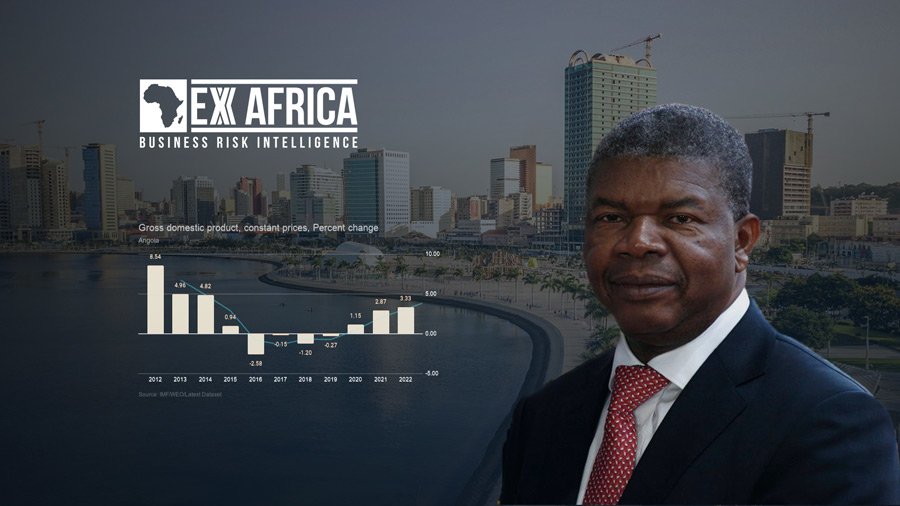 Angola’s beleaguered government has been hoping for greater US support for targeted sanctions to support its anti-corruption campaign and fresh US oil investments as an alternative to unsustainable Chinese project finance. Disappointed on both fronts, Angola will now be forced to accept painful IMF-endorsed austerity or sell off its most valuable oil assets to avoid debt servicing distress.

On 17 February, United States Secretary of State Mike Pompeo visited the Angolan capital Luanda, where he denounced corruption and made statements in support of US businesses, particularly those operating in Angola’s oil and gas sector. Pompeo’s visit came as the US administration is promoting its revamped International Development Finance Corporation and the new ‘Prosper Africa’ trade and investment strategy as an alternative to Chinese loans that have overburdened Angola’s economy.

However, Pompeo offered no concrete support for Angola’s anti-corruption campaign and he brought no new incentive programme for American investment in Angola. The lack of such initiatives are a serious disappointment to the Angolan government which is seeking to boost the oil sector to drag its economy out of a three-year recession, while leveraging a high-profile corruption campaign as a distraction from plummeting living standards ahead of local elections later this year. 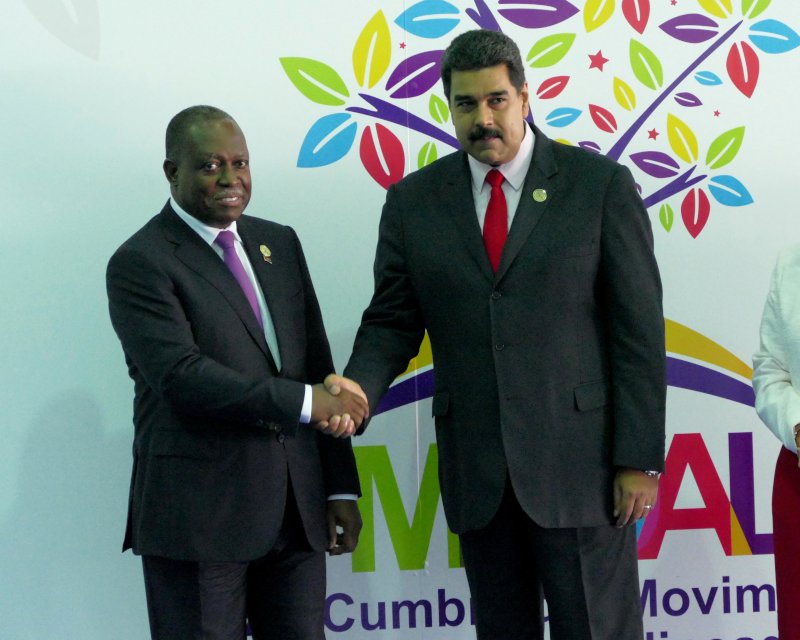 Various activist and accountancy reports claim that some USD 100 billion was fraudulently transferred from Angola during 2002 and 2017 by the country’s political elite and so-called ‘business generals’. Since coming to power in 2017, President João Lourenço has asserted that his government has recovered some USD 5 billion illegally withdrawn from the country’s accounts. EXX Africa believes that some of these funds were repaid as ‘voluntary repatriations’ by Lourenço’s political allies such as his main adviser Manuel Vicente, as well as influential former officials General Manuel Hélder Vieira Dias Júnior (‘Kopelipa’) and Leopoldo Fragoso do Nascimento (‘Dino’). These payments were done through highly opaque structures, sometimes involving investment management firms like Gemcorp Capital (See SPECIAL REPORT: ANGOLA SHADOW STATE EXECUTIVES IMPERIL PRIVATISATION AGENDA).

These three men, known as the Triumvirate under former president José Eduardo dos Santos, remain some of the country’s most powerful figures who exercise unparalleled influence over the government of President Lourenço. As a result, the administration has been reluctant to target the Triumvirate and other ‘business generals’ who remain deeply entrenched within the military and the governing Movimento Popular de Libertação de Angola (MPLA) party.

Instead, Lourenço’s government has focussed all its attention on blaming the family of former president dos Santos for Angola’s current economic problems. The family is worth an estimated USD 10 billion, much of it locked in investments held by the former president’s daughter Isabel dos Santos. Angola’s chief prosecutor Hélder Pitta Gróz has been trying to persuade the US government to impose sanctions on Isabel dos Santos via the Treasury Department’s Office of Foreign Assets Control (OFAC), which would prevent her companies from carrying out transactions in US dollar currency. However, OFAC has not been supportive of the sanctions, while US Secretary of State Pompeo made no mention of such measures during his visit to Luanda in an obvious disappointment for the Lourenço government. 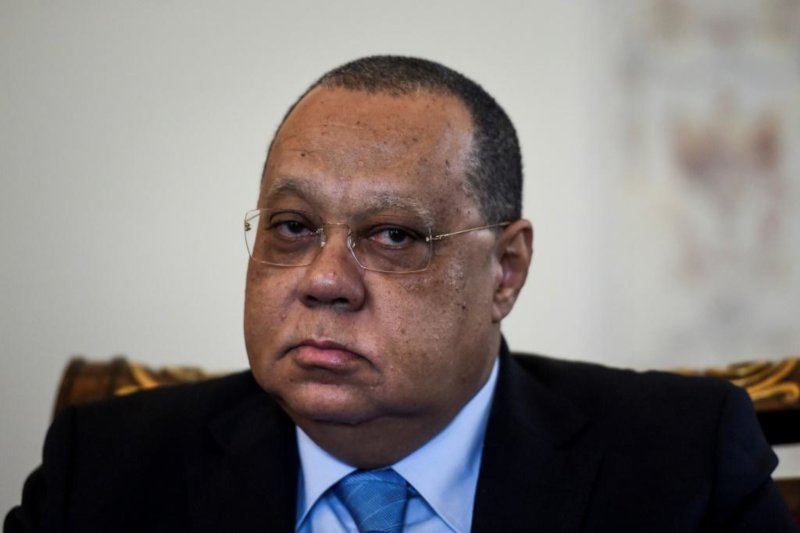 Meanwhile, Angola’s chief prosecutor Gróz is moving ahead with measures to force dos Santos to sell her assets in the country. On 31 December 2019, a court froze Isabel dos Santos’s assets in Angola, alongside those of her husband Sindika Dokolo and Mário Leite da Silva, chairman of Banco de Fomento Angola (BFA). Gróz claims the trio have caused losses to the state of more than USD 1 billion through diamond sales from state companies such as Sodiam and Endiama, and oil sales by Sonangol.

Prosecutors will need to submit evidence in order to implement the asset freezes for which they will require the cooperation of Portuguese authorities. On 11 February, Portugal’s prosecutor also froze Isabel dos Santos’s personal accounts and those of the firms she directly owns in the country. A public relations contest has ensued to ensure political backing in Portugal, as well as other jurisdictions like the US, Spain, Switzerland, and the UK. A cache of hundreds of thousands of leaked documents – known as Luanda Leaks – has been an integral part of this ‘publicity war’ between the parties in which both local and international media have displayed exceptional levels of bias (See SPECIAL REPORT: TACTICS IN MEDIA MANIPULATION IN ANGOLA AND VENEZUELA).

In the meantime, at least nine Angolan-Portuguese companies controlled by dos Santos will effectively be unable to carry out business operations – these include banks such as BFA and Banco Eurobic, as well as power company Efacec and oil firm Galp Energia, and digital and telecoms firms NOS, Unitel, and Zap. In Portugal, the asset freeze has prevented dos Santos from paying salaries and taxes at firms such as venture capital and private equity firm Fidequity.

Many international banks already refuse to deal with dos Santos companies, while any eventual imposition of OFAC sanctions would prevent auditing, legal, and PR companies from working with the family’s businesses. The effective prohibition on business operations imposed on dos Santos companies is likely to trigger a shock to both Angola and Portugal’s economies. The dispute is likely to be dragged through the courts in multiple jurisdictions for many years, while the prospect of any dos Santos funds being repatriated to Angola seems highly unlikely.

The Angolan government had also hoped for fresh commitment from the US government to support Angola’s oil economy. US oil majors Exxon Mobil and Chevron have significant stakes in Angolan oil fields. Chevron has also signed onto a consortium to develop Angola’s natural gas assets alongside Italy’s Eni, France’s Total, Britain’s BP and Sonangol. However, with lower oil prices there is little chance of boosting production levels. Angola’s oil production dropped from 1.8 million barrels per day (bpd) five years ago to 1.2 million today. The impact on the economy has been disastrous, with economic output shrinking since 2016 and inflation running at 20 percent. 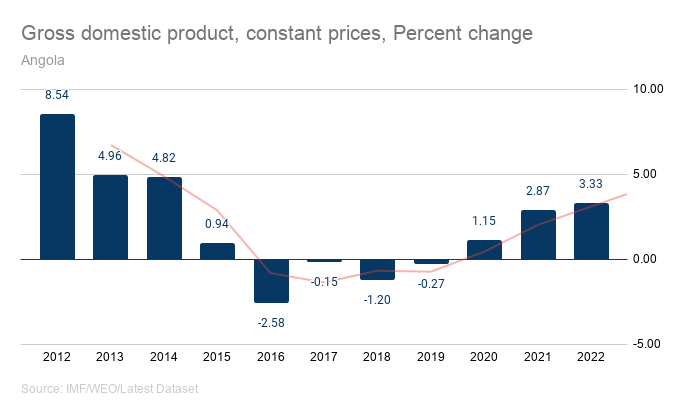 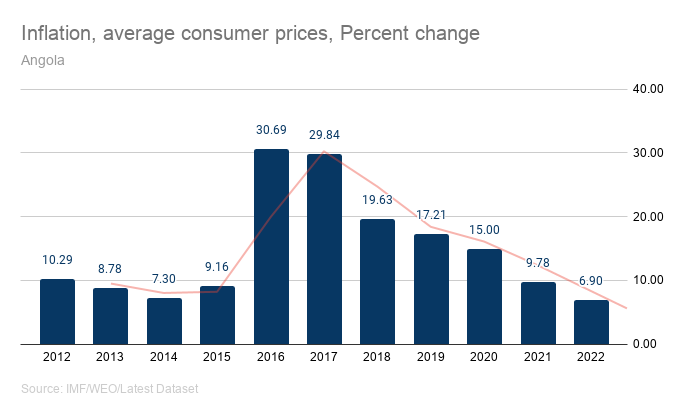 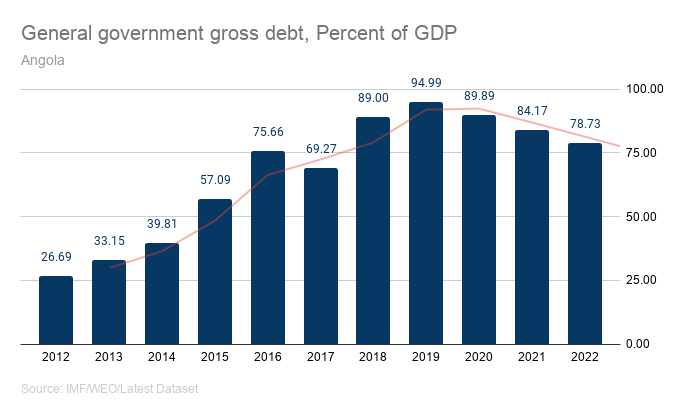 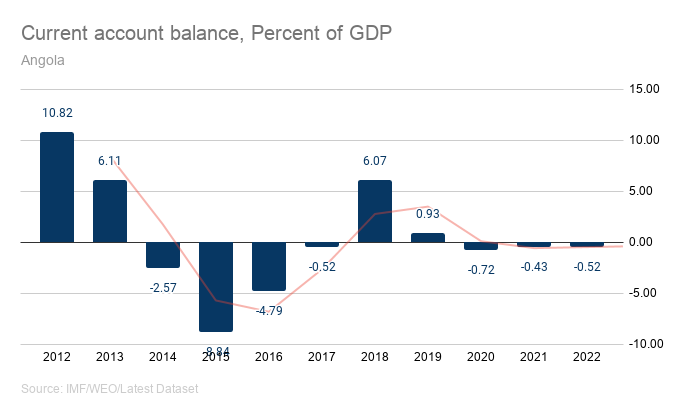 Angola has hoped for greater US investment in its oil and gas sector as an alternative to Chinese loans. China has borrowed some USD 40 billion in credit and project finance to Angola over the past 15 years (some estimates are much higher). Massive non-performing loans in local kwanza currency have also triggered a credit crisis. The ratio of debt-service to GDP is estimated at over 91 percent. However, the US has been reluctant to become further embroiled in Angola and its investors have steered clear off its banking sector and privatisations. There seem to be only two remaining ways in which Angola can increase its revenues, namely through multilateral assistance and oil asset selloffs.

The International Monetary Fund (IMF) is calling for more spending cuts and more substantial economic reforms. In late 2018, the Fund committed to a three-year USD 3.7 billion credit facility in exchange for austerity, economic restructuring, and banking sector reforms. Lourenço’s government is trying to stall the IMF’s painful reforms by seeking a recovery of stolen funds, although the prospect of a settlement with the dos Santos family seems unlikely. So far, the anti-corruption campaign targeting dos Santos is highly popular and many Angolans still believe that there is a fair chance that much of the stolen cash will be returned. However, as living standards plummet, inflation spirals, and budgets are cut, trust in Lourenço’s government is likely to weaken. Pressure will also rise on the president to add new targets to the anti-corruption campaign, including senior MPLA party officials, influential ‘business generals’, and the all-powerful Triumvirate upon whose political support Lourenço depends. 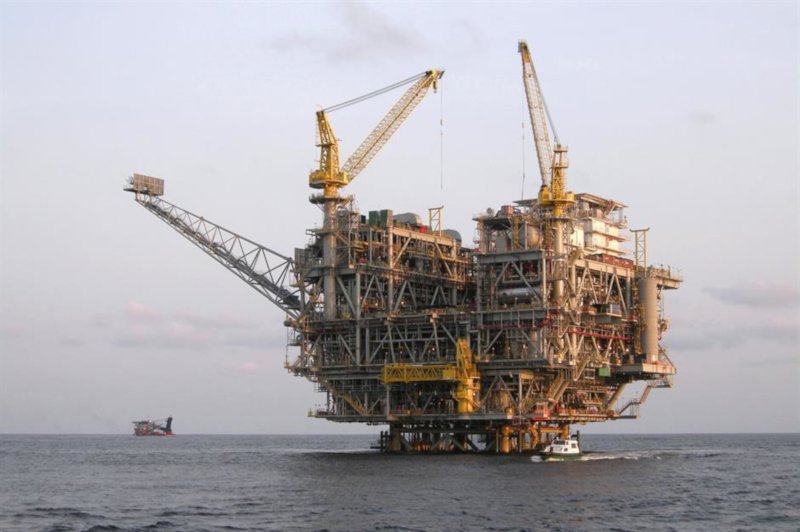 Instead, the government is looking to boost oil sector revenues with a renewed sense of urgency. Over the next three years, Sonangol will sell many of the exploration blocks in the Namibe and Congo Basins, even though production is falling from existing blocks in these basins. The sale of Sonangol subsidiaries has also attracted little interest from local and international investors. There remain high hopes that the sale of 30 percent of Sonangol’s share capital will be more successful as oil majors line up to purchase prime oil assets at discount prices. However, Angola’s oil and gas regulatory authority has so far displayed little capability to manage the partial privatisation of one of Africa’s largest companies. There is a growing suspicion that local firms affiliated to the country’s elite will receive favourable treatment in the asset sell-off process. Manuel Vicente’s company Somoil already holds assets in the Congo Basin and the company is preparing to snap up more blocks through its network of influence (See ANGOLA: PRIVATISATIONS LIE AT THE HEART OF DEBT REDUCTION AND ECONOMIC RECOVERY). 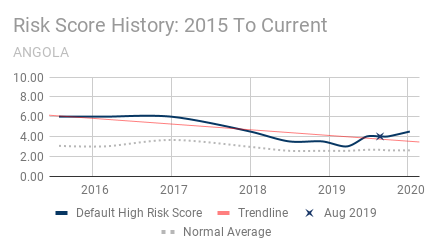 A lack of US support for Angola’s anti-corruption campaign against the dos Santos family and for the country’s looming privatisations in the oil and other sectors is a disappointment for the administration of President Lourenço. The asset freeze against Isabel dos Santos will carry little weight without OFAC endorsement. Meanwhile, US companies like Chevron and ExxonMobil will be little inclined to invest further into an expensive and cumbersome market with maturing oil resources. The US Secretary of State’s visit to Luanda in February only paid lip service to fighting corruption and promoting an alternative to Chinese project finance debt. Angola will have little alternative but to sell more lucrative oil assets and to accept painful IMF-endorsed austerity measures. 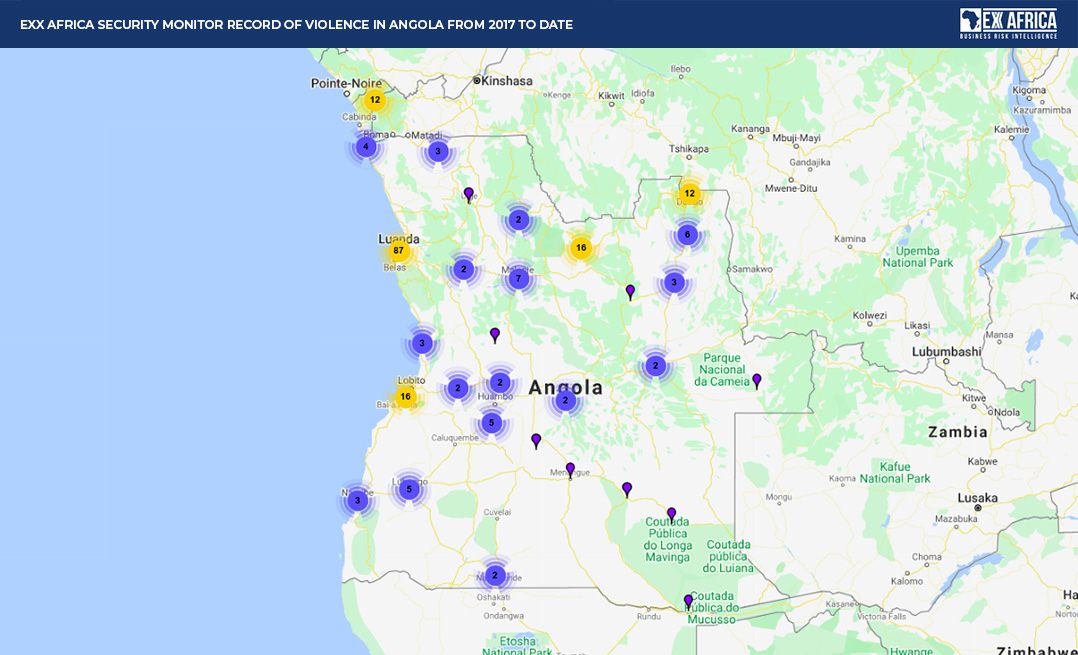 The asset selloffs at Sonangol will carry on in the three-year outlook despite little investor appetite for many of the firm’s subsidiaries and non-core assets. Oil majors will be interested in some of the company’s highly priced oil assets when these eventually come onto the market, although there are concerns that local politically affiliated investors will be favoured in such selloffs. The two agencies that oversee oil sector privatisation, namely oil and gas regulatory authority ANPG and state-owned enterprises oversight institute IGAPE, have already been compromised. Both entities are exposed to the political influence of gatekeepers such as Manuel Vicente, raising speculation that firms like Vicente’s Somoil will benefit unfairly from the privatisations.

In terms of IMF austerity, the Fund is mandating fiscal discipline that includes unpopular measures such as scrapping fuel subsidies and further devaluing the kwanza. Such policies, if not carefully balanced with meaningful socio-economic concessions, will trigger renewed unrest and industrial action. The government fears the return of unrest on the scale of the 2011 riots and other outbreaks of protests since then. We expect more strikes and protests, including from skilled workers in the cities and public sector employees who are exposed to any economic downturn due to public payroll cuts and high inflation which is expected to hover around 20 percent for the next three years.

President Lourenço wants to hold local elections this year, although falling living standards may indicate his MPLA party will be punished in any ballot. In 2017, the MPLA’s support fell to 61 percent from 82 percent in the 2008 parliamentary elections. Moreover, the scapegoating of dos Santos loyalists for the country’s economic malaise is starting to rip apart the usually unified MPLA that has ensured Angola’s political stability since the end of the civil war. The party could permanently split unless there is an improvement in the economy.

Therefore, all eyes will be on Sonangol over the next few months as the company begins implementing its promised restructuring. Any sign that the government seeks to overturn reforms or lines up the elite to benefit from politically influenced tenders in privatisations would undo much of the economic benefits of the IMF programme. Meanwhile, the privatisations agenda is undermined by the pledged commitment of most of Angola’s oil shipments to China in repayment for past infrastructure projects, many of which are already crumbling.