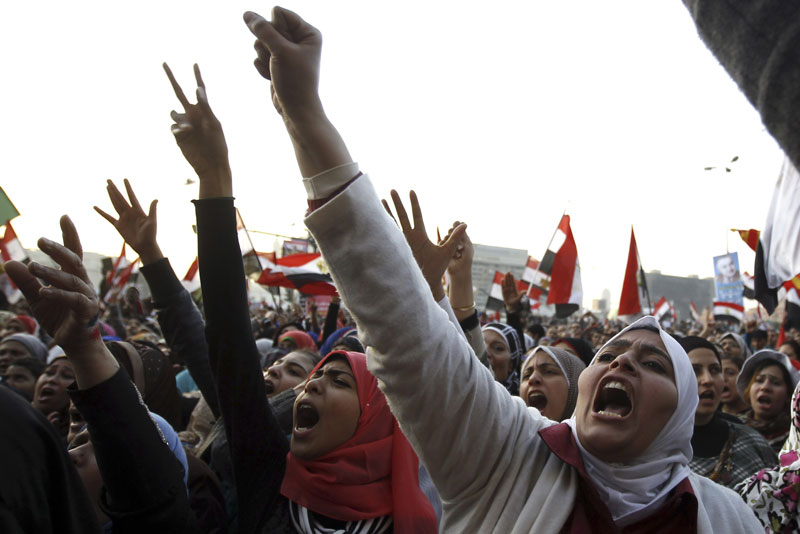 As Egypt continues to manage the broad impact of the COVID-19 pandemic, in late September increasing socio-economic pressures triggered a rare widespread public display of discontent, as protests erupted across the country. Amidst lingering economic uncertainty, we assess the risk of further civil disturbances in the coming months.

On 20 September 2020, in a rare event, hundreds of people gathered in street protests in several areas of Cairo and Giza, calling on Egyptian President Abdel Fattah Al Sisi to resign. Within days, small demonstrations had spread across the capital, as well as to villages and towns in the Nile Delta and Nile Valley, including Damietta, Luxor and Aswan. Security forces responded in typical fashion, dispersing demonstrators using tear gas, batons and rubber bullets, and in at least one reported incident, live ammunition. According to Amnesty International, between 20 September and 30 September at least two people were killed during the demonstrations and over 1,000 were arrested. 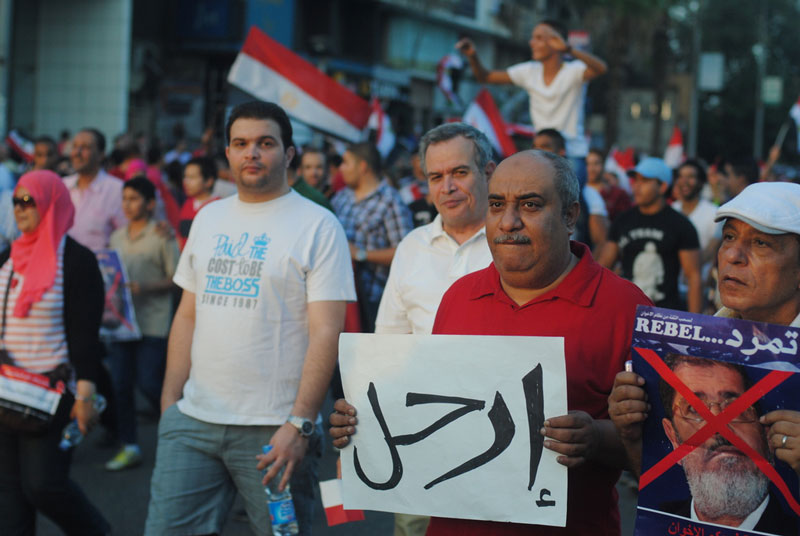 The main impetus behind the initial protests was a law demanding that residents of houses built illegally on agricultural land either pay a fine to legalise their residences, or face eviction and the demolition of their homes. However, the demonstrations quickly came to encapsulate a broader range of public concerns, including government repression and rising poverty levels. Many of these issues mirror those which drove street demonstrations in Cairo one year earlier, indicating that they remain deep-seated in the Egyptian public psyche.

Under Sisi, incidents of civil unrest have become ever more infrequent in the face of an overbearing security apparatus and the state’s intolerance of most forms of political opposition and civil activism. Nonetheless, as illustrated by the September demonstrations, the ever-present threat of state-imposed violence has evidently not completely suppressed the willingness of Egyptians to express their dissatisfaction with Sisi’s government through protest action.

While the recent bout of protests has since subsided, many of the grievances driving them have been exacerbated under the heightened economic pressures which accompanied the COVID-19 pandemic. 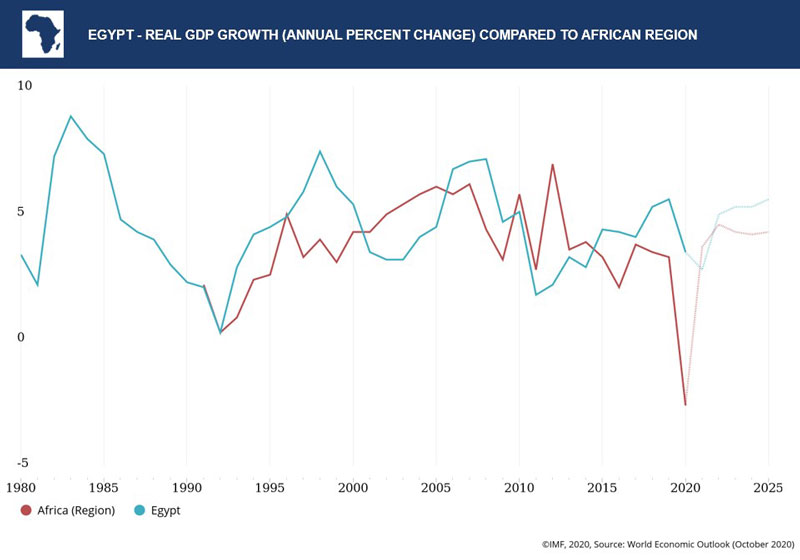 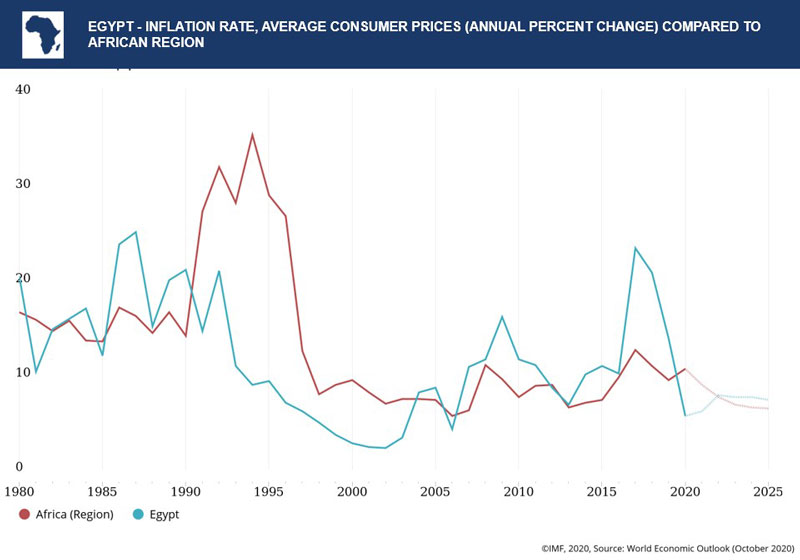 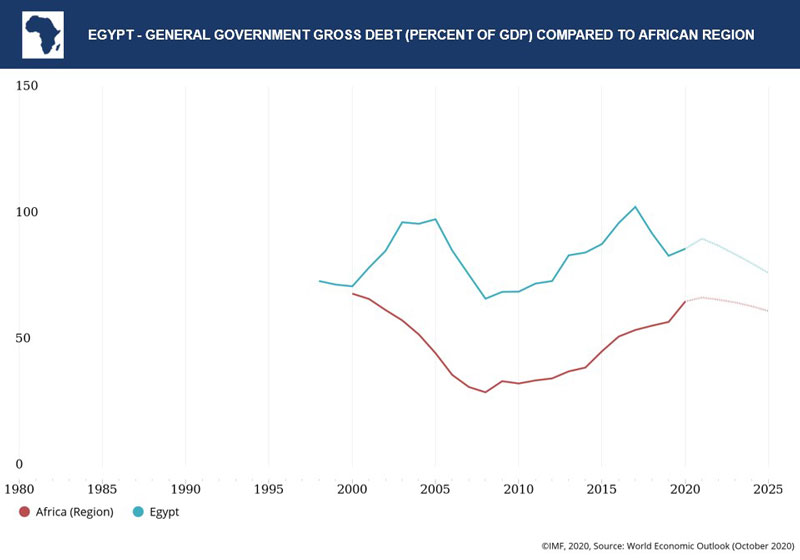 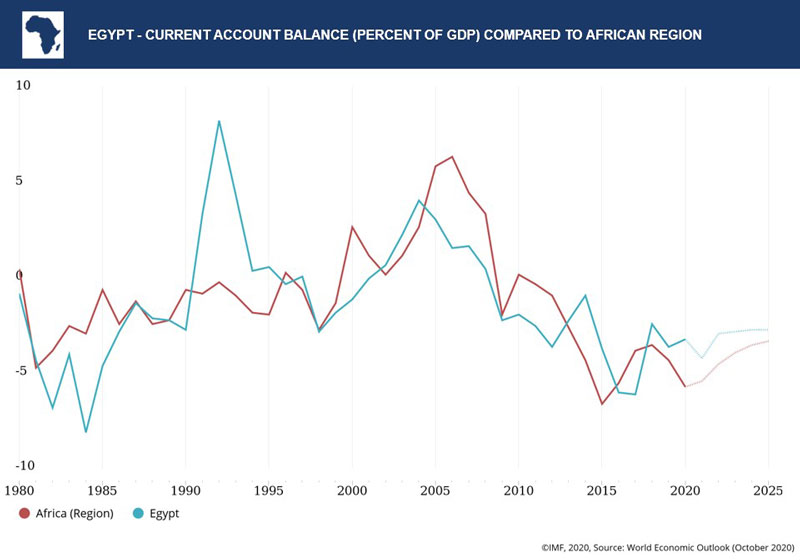 On the surface, during the past few months Egypt’s economy has performed better than was expected. In October, the International Monetary Fund (IMF) revised Egypt’s projected GDP growth rate for 2020 to 3.5 percent from an earlier projection of two percent, naming Egypt as one of only three economies in the Middle East and Central Asia that maintained positive GDP growth during the pandemic. According to IMF predictions, Egypt’s GDP growth is expected to slow to 2.8 percent in the 2020/2021 financial year, before recovering to 6.4 percent in the 2021/2022 fiscal year. Inflation has also steadily declined, reaching 3.7 percent in September. All three global credit ratings agencies have given Egypt a stable outlook.

Nonetheless, the COVID-19 pandemic has significantly curtailed Egypt’s foreign earnings, highlighting long-standing structural vulnerabilities. According to the IMF, Egypt’s main sources of foreign revenues, including tourism, remittances, and oil and gas exports, are expected to fall by 30 percent by the end of 2020. Reflecting this, foreign exchange reserves, which stood at USD 45 billion before the first cases of COVID-19 arrived in Egypt, fell by just over USD 5 billion in the first quarter of 2020.

While the finalisation in June of USD 5.2 billion in additional IMF funding has contributed to the shoring up of Egypt’s remaining foreign exchange reserves in the short-term, the recovery of major foreign revenue streams will likely take some years. In particular, a second global wave of COVID-19 infections threatens to deepen the crisis facing Egypt’s hard-hit tourism sector, which accounted for 11.9 percent of the country’s GDP in 2019. Moreover, global oil and gas prices are expected to remain depressed going into 2021, constraining both foreign investment and earnings in the hydrocarbons sector, which remains Egypt’s largest recipient of FDI.

As a result, borrowing is likely to remain the primary pathway for propping up the country’s dwindling foreign exchange reserves. Nonetheless, a significant degree of risk attends this option. A slight decline in external debt, from USD 112.7 billion at the end of 2019 to USD 111.3 billion in September 2020, belies the precarious nature of Egypt’s national debt situation (See EGYPT: RETURN TO THE IMF AS DEBT SUSTAINABILITY COMES UNDER PRESSURE). As such, any marginal improvements in the country’s debt balance in the coming months are highly unlikely to be indicative of a sustained shift. Barring the low likelihood scenario of an unexpectedly rapid recovery in key economic sectors, Egypt’s total debt is likely to continue to increase for at least the coming 12 months. 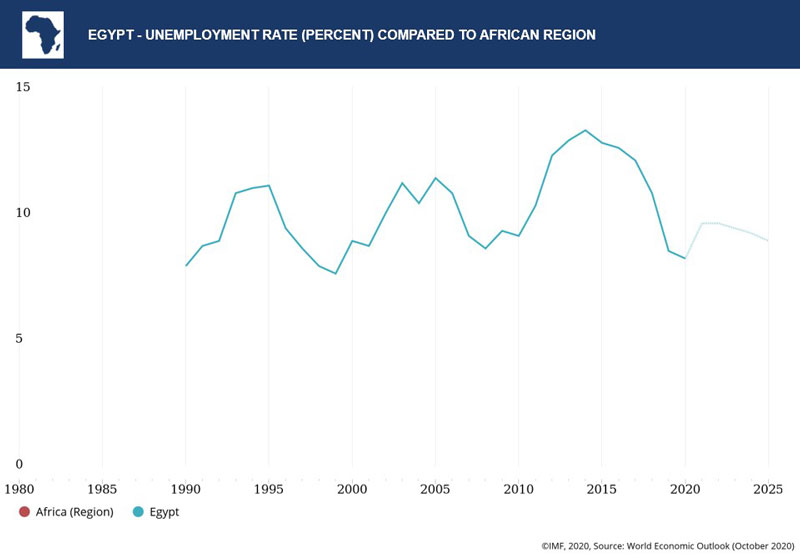 The September 2020 protests were primarily concentrated in low-income areas, highlighting that the poorest members of Egyptian society have been disproportionately affected by the current situation. In the 2017/2018 financial year, approximately 32.5 percent of Egyptians were living under the poverty line, compared to 27.8 percent the previous year. This number has undoubtedly increased in 2020 given the economic impact of COVID-19. For instance, according to Egypt’s Central Agency for Mobilisation and Statistics, at least 50 percent of Egyptians borrowed money during the pandemic to meet their basic household needs.

As national debt continues to rise, the government has maintained an austerity programme which has seen recent cuts to public subsidies. In August, the state both decreased the size of subsidised bread loaves from 110g to 90g and increased the price of Cairo metro tickets for the second time in two years. Moreover, on 15 August Sisi issued a new law which would see one percent deducted from all worker salaries and 0.5 percent deducted from all pensions to be allocated towards a special emergency fund for addressing the economic fallout of pandemics and natural disasters. As the COVID-19 pandemic continues to contribute to widespread unemployment and rising costs of living, the ongoing dismantling of long-standing social safety nets will only exacerbate the deepening sense of frustration amongst lower-income households.

The COVID-19 pandemic remains a source of considerable uncertainty. As at 19 October, Egypt had a recorded 105,547 cases of COVID-19 and 6,130 deaths attributed to the virus. While these numbers are relatively high compared to the rest of the region, Egypt’s daily cases have dropped considerably since June and the government has gradually lifted its restrictive measures. At the same time, the pandemic is far from over, and it remains difficult to predict both its local and global trajectory. Much of Europe has seen a considerable resurgence in cases in recent weeks, and renewed travel restrictions have been implemented in a number of states.

In Egypt, health minister Hala Zayed has stated that the government will not impose either a complete or partial lock-down in the case of a second wave of infections, but has prepared a comprehensive four-part action plan to deal with an anticipated rise in cases. The plan includes: establishing safe health service outlets, creating a reserve of medical supplies and medications, upholding strict entry criteria (including the requirement for a recent negative PCR test result) at border entry points, and the production and distribution of a COVID-19 vaccine. Nonetheless, while avoiding a strict lock-down may sustain much domestic economic activity, the international impact of the pandemic will likely continue to hamper the complete recovery of key economic sectors – especially tourism and oil and gas. 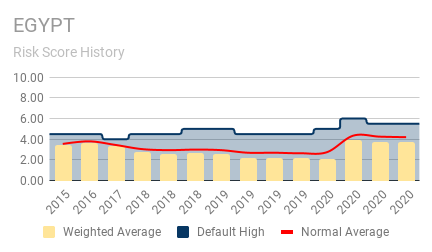 Despite a political climate marked by the systematic repression of political opposition and consistent efforts to dismantle activist and civil society organisations and networks, the September demonstrations indicate that some room still remains for the Egyptian public to express their discontent through protest action. As such, a wide range of unaddressed social and economic issues will continue to drive the threat of civil unrest in the coming months.

While the IMF emergency funds have bought some breathing room, there are few signs of a dramatic recovery on the immediate horizon. Egypt’s Ministry of Planning and Economic Development has flagged that the next phase of economic reforms building on the 2016-2019 reform agenda are in the process of being developed and enacted, including an explicit focus on enhancing the competitiveness of the private sector. For instance, in December 2020 the government aims to submit draft amendments to the Egyptian Competition Law to bring the private sector onto more equal footing with public enterprises in terms of procurement processes. However, there is a limit to how far such reforms can extend, or how quickly they can be implemented, given the overt interests within the military to maintain its domestic economic dominance.

If economic growth proceeds at a much lower rate than expected and does not filter through to Egypt’s most vulnerable sectors of society, the threat of civil unrest will correspondingly increase – especially if additional cuts to social subsidies are implemented as part of debt management efforts. There is also widespread speculation that the low inflation rate will trigger an IMF consultation in November, at which point it is likely that the international financial institution will advise Egypt’s Central Bank to lower interest rates to boost growth. The resultant rise in inflation and related increase in the cost of living from such a decision is likely to principally affect low-income households, potentially further feeding into popular frustrations and driving the threat of protests.

Nonetheless, demonstrations are unlikely to become widespread such as to cause significant long-term disruption to business activity or threaten to overthrow the government. The Egyptian security forces have substantial experience in mitigating the threat of civil unrest, and any incidents in major urban areas are usually accompanied by a lock-down of major access routes and public transport, as well as the large-scale deployment of security forces to symbolic protest sites, such as Cairo’s Tahrir square. In large part, the concentration of recent protests in low-income areas outside of city centres was an enabling factor for their rapid spread, given that security forces have typically prioritised more central urban areas when implementing preventative measures. This is likely to remain the case in the coming months; protests are more likely to manifest in outlying lower-income areas rather than central areas of Cairo and other major cities.

The upcoming parliamentary elections from 24-25 October are unlikely to be well-attended, both due to COVID-19 as well as general voter apathy and political fatigue. A heightened presence of security forces is anticipated over the two days, and large demonstrations are not likely to accompany the election.