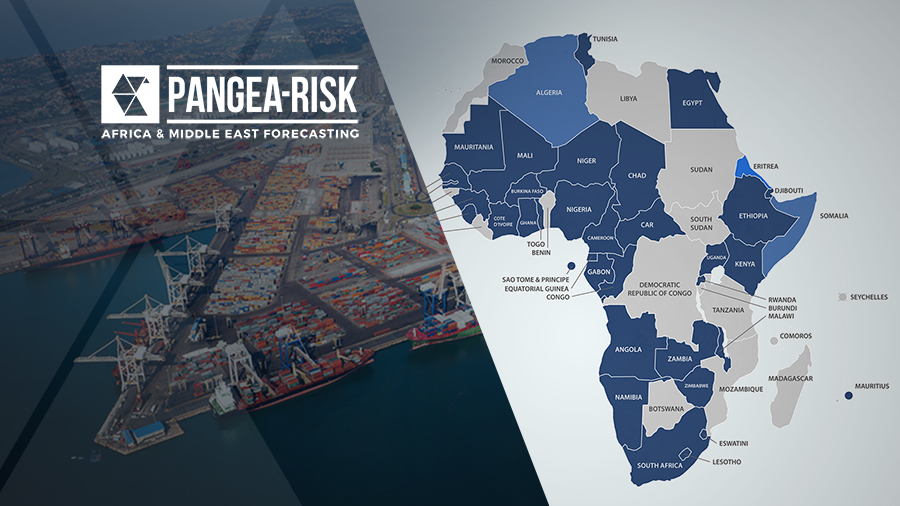 While the launch of the African Continental Free Trade Agreement at the start of this year was greeted with widespread optimism, trade under the agreement has yet to gain much traction owing to slow implementation and a range of enduring obstacles. Most countries are already slipping behind implementation deadlines, while only large, diversified economies are set to benefit from the free trade provisions in the short term.

Almost six months since trading officially commenced under the African Continental Free Trade Agreement (AfCFTA), the landmark trade integration accord has gotten off to a slow start, with only a handful of trades reportedly taking place under the deal’s new reduced tariff framework.

The AfCFTA, which sets out to create a single customs union across the African continent and effect the removal of tariffs on 90 percent of tradeable goods within the next decade, has been hailed as a “game changer” and “potential turning point” for African economic development, and has enjoyed extensive political support in both global and regional high-level political and business forums. Nonetheless, the record of implementation has thus far been mixed, and the volume of reported trade under the deal in its first half year has been lower than expected (see SPECIAL REPORT: SIX MONTH COUNTDOWN TO AFRICAN FREE TRADE).

As it currently stands, for the 36 African states which have ratified the agreement, trade utilising the AfCFTA’s tariff reductions is theoretically possible for 81 percent of tradeable goods, while negotiations still remain ongoing over the regulations for sensitive goods – including sugar, automotive vehicles, clothing and textiles. Despite this, the 1 January launch of trading under the AfCFTA was largely symbolic, given that the vast majority of states that have ratified the agreement have yet to produce and implement action plans or establish the customs arrangements necessary to utilise its provisions.

PANGEA-RISK outlines the progress made thus far, highlighting those countries which are furthest ahead in making preparations to take advantage of the agreement, as well as the challenges which lie ahead.

Widespread commitment but slow progress on the ground 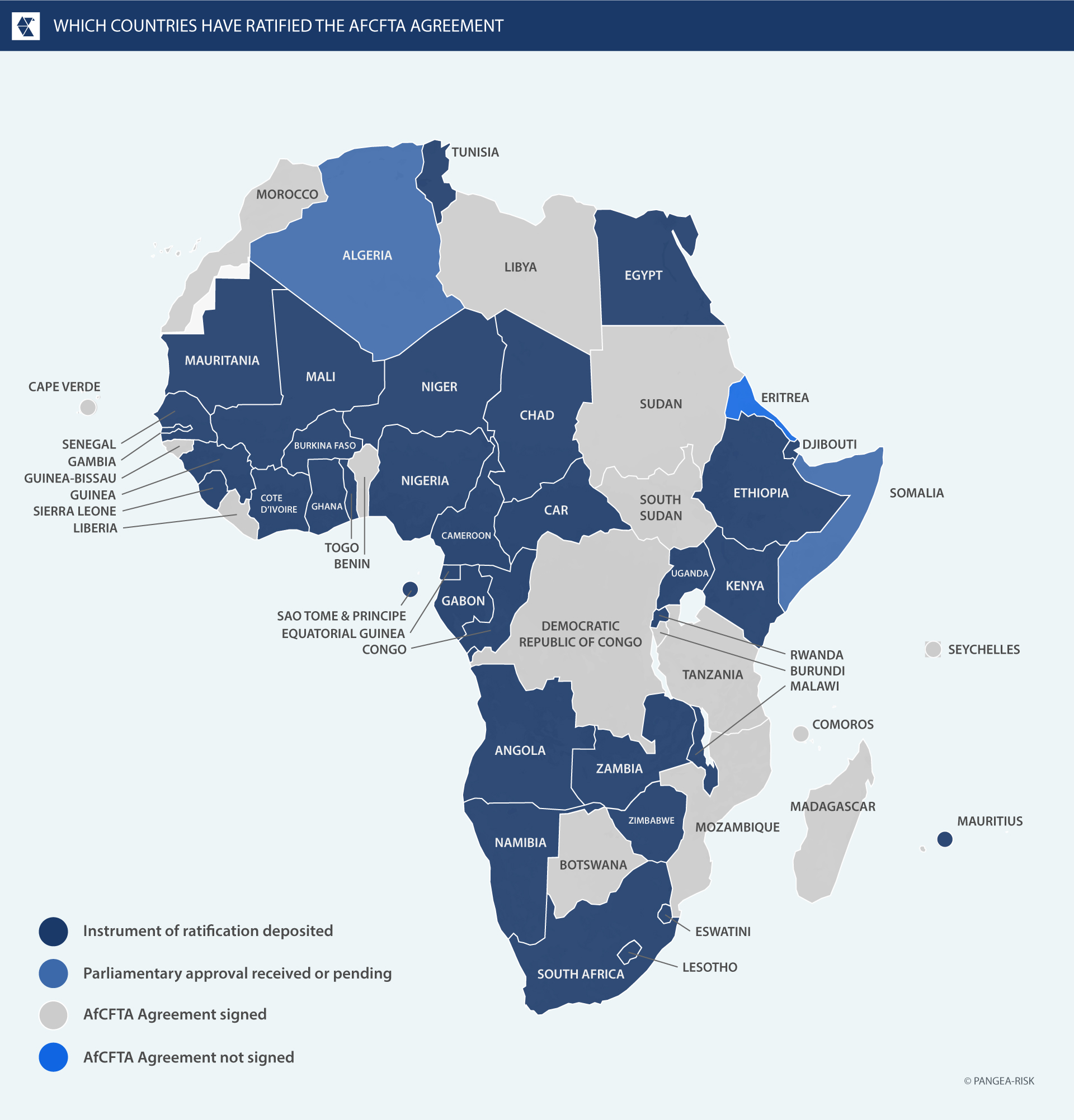 With the AfCFTA’s Phase I and Phase II negotiations having been concluded, and the Phase III talks expected to be completed by 31 December 2021, the rapid pace of the AfCFTA’s development and consultative process reflected a high degree of political will, which has largely been matched by the fast pace of legislative approval of the agreement amongst its 54 signatories. As of 17 June 2021, 18 of the signatory states have yet to ratify the agreement.

Nonetheless, the lack of universal ratification creates significant blockages to the deal’s broader implementation, particularly in terms of the interaction between the Regional Economic Communities’ (REC) customs unions and the AfCFTA (see SPECIAL REPORT: AFRICA’S COMMON MARKETS COMPETE FOR TRADE AND INVESTMENT). Each of the continent’s eight customs unions has agreed that their member states will trade collectively under the AfCFTA, meaning that trading will not commence in earnest as long as any states within each regional customs union has not ratified the agreement. For instance, despite South Africa having established the legislative and regulatory requirements for trading under the AfCFTA, it remains unable to do so until Botswana has ratified the agreement – both states being members of the Southern African Customs Union.

Of the 36 African states that have ratified the agreement as of 17 June 2021, only 11 countries have validated national AfCFTA action plans, indicating a significant gap between legislative approval and implementation. The AfCFTA implementation strategies of the remainder of the signatories are in various stages of development, with the bulk of these still in the conception phase. Moreover, only South Africa, Egypt, and Ghana have thus far established the customs infrastructure and procedures necessary to process trades under the AfCFTA. However, even these states with a high level of preparation have been largely unable to make full use of the AfCFTA’s provisions thus far due to other constraints. For instance, while South Africa has already gazetted some of the legislation necessary for implementation of the AfCFTA, and the tax authorities have established customs procedures relating to trade under the agreement, South Africa’s domestic legislation thus far only lists Egypt and São Tomé and Principe as trading partners under the AfCFTA due to the need to independently scrutinise each signatory’s tariff offers to establish reciprocal tariff reductions. 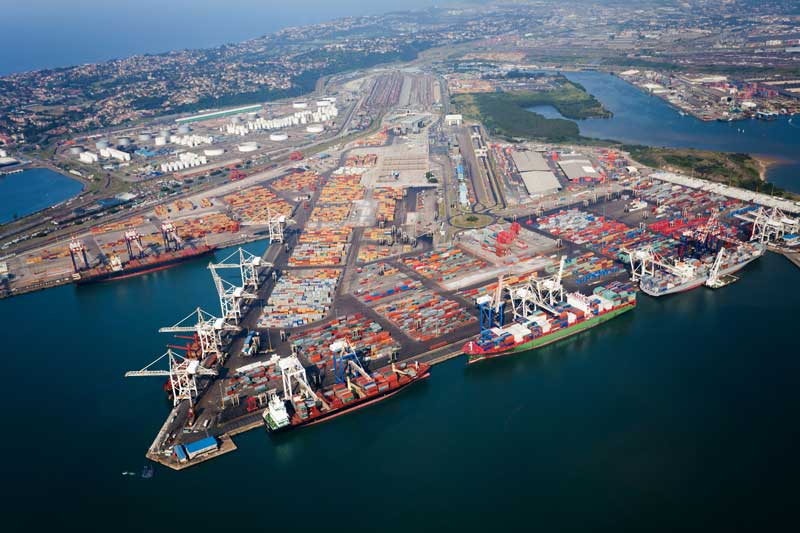 Nonetheless, the level of commitment to the AfCFTA remains high across the region, and momentum is steadily building not only on the legislative front, but also in terms of new investments and funding aimed at creating incentives and supporting the agreement’s implementation. For example, in coordination with the African Union, Afreximbank is expected to shortly introduce a USD 5 billion AfCFTA Adjustment Facility in order to offset the financial impact of the short-term loss of tariff revenues, as well as to support the development of production capabilities to better capitalise on the opportunities created by the deal. Additionally, in May, the Africa Finance Corporation announced that it had secured USD 250 million in US funding for infrastructural development aimed at complementing the AfCFTA. 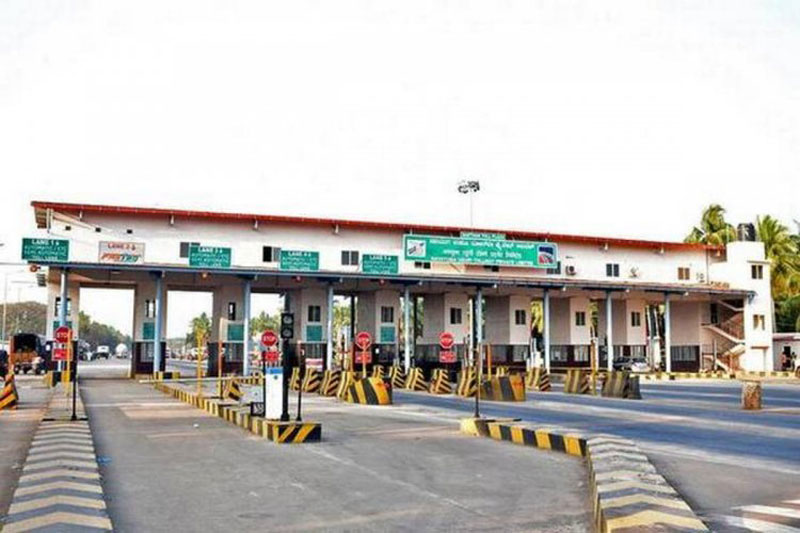 While the progress thus far has been encouraging, universal ratification is only the first step, and multiple challenges lie ahead. For most signatories, the full and effective implementation of the AfCFTA will require a vast range of policy enablers – including national policy reforms and the introduction of new legislative measures. Substantial investments are also needed into infrastructure in most countries – including digital systems – as well as logistics, in order to improve both domestic and cross-border transport corridors as well as streamline customs procedures.

Moreover, while political will is currently high, considering the finer details of the agreement, many states appear reluctant to liberalise their economies to the extent eventually demanded by the AfCFTA. For example, during the time period when the AfCFTA was being negotiated, Nigerian import restrictions increased considerably, indicative of the growth of domestic support for protectionist policies – many of which are likely to clash with the AfCFTA’s core tenets. Indeed, Nigeria was one of the last countries to sign the AfCFTA amidst widespread concerns voiced by local industry representatives that the deal would facilitate the “dumping” of cheap foreign manufactured goods in Nigeria (see NIGERIA: INFLATION FORCES THE GOVERNMENT’S HAND ON REOPENING OF LAND BORDERS). Many other states are likely to find themselves in a similar position, with small and medium-sized firms across the continent already expressing apprehension over the potential for cheaper imports to reduce demand for locally produced goods and suppress the development of domestic manufacturing sectors.

Some of the same reluctance extends to establishment of a free movement regime for people across African borders, which has been identified as a crucial objective in order to fully realise the goals of the AfCFTA. In aid of this, the AU intends to roll out an AU passport in 2021, which will grant visa-free travel to the holder in all 55 AU member states. However, adopting this passport is likely to be a sticking point for many states. 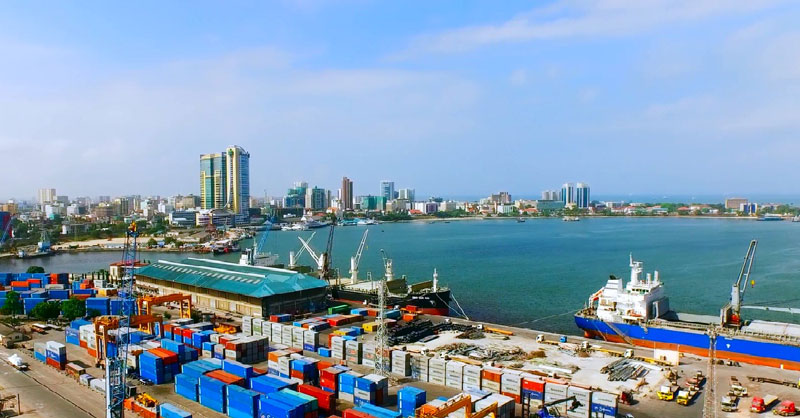 While most states are moving ahead with implementation and the development of enabling frameworks, much also relies on whether the private sector is ready, able, and willing to make use of the AfCFTA provisions. Indeed, the limited engagement by the private sector suggests that awareness of the deal’s potential is low. For instance, according to the results of a recent government-led industry survey in Ghana, only 26.2 percent of agribusinesses were even aware of the existence of the AfCFTA. Similar results emerged from a survey of Nigerian micro, small, and medium enterprises in late 2020, revealing that only 25 percent of these firms had heard of the agreement.

Of those firms that are aware of the AfCFTA, many – particularly smaller and medium-sized firms – are not adequately positioned to take advantage of it, given the limited availability and accessibility of information regarding the implications of the agreement, the conduct of cross-border business, as well as new opportunities which have been opened by the deal. Some of the more well-prepared states – notably Ghana and South Africa – have recognised this obstacle and have launched information and training workshops for local commercial entities interested in taking advantage of the AfCFTA’s provisions.

The end of June marks the deadline for concluding negotiations over the rules of origin for the remaining 19 percent of tradeable goods, as well as for the ratification of the agreement and the submission of tariff reduction schedules by all signatories for remaining categories of goods. However, as of 17 June, amongst those signatories who have yet to deposit their instruments of ratification, only Tanzania is reportedly close to approving the agreement. As such, it remains likely that the 30 June deadline will need to be extended to accommodate ongoing domestic consultations.

Beyond the ratification process, the implementation and effective utilisation of the AfCFTA is likely to be a drawn-out process, with full implementation still many years away. However, the high level of political will across the region, fuelled by the added imperative of boosting economic recovery after COVID-19, is likely to see slow but steady progress in negotiations. As such, the coming months will likely see a concerted attempt by signatories to incorporate the agreement into national and regional legislative frameworks. Nonetheless, the development of broader infrastructural and institutional policy enablers is likely to be slower, particularly given lingering questions as to the actual degree of willingness amongst some signatories to implement the provisions of the AfCFTA. As such, the resultant uneven pace of regional and national legislative change across trading partners is likely to delay the development of regular trade outside of already-established patterns for some time to come.

Based on the challenges outlined above, the countries that stand to benefit most in the short to medium term are those that have already implemented their action plans, established customs procedures, and boosted capacity, and face lower barriers to cross-border trade in terms of infrastructure and logistical arrangements. This points to Africa’s largest diversified economies, which have developed manufacturing sectors and well-established trade links, and host larger multinational commercial entities which have a broad African presence. Amongst these countries, South Africa and Nigeria are particularly well-placed to take advantage of the new provisions, accounting for 36 percent and 8 percent of intra-African trade respectively. Bilateral trade between the two states climbed to a new high of USD 2.9 billion in 2020 and is expected to see a further increase in 2021 as a result of the AfCFTA.

In the interim, most states are likely to continue to focus on established patterns of trade within the RECs, given that the AfCFTA allows for rules within the REC customs unions to supersede those within the AfCFTA wherever tariff rates are reduced below the rates laid out in the AfCFTA. While the eventual reduction of tariffs under the AfCFTA may create additional incentives to develop new trade links, more critical considerations informing expansion into new export markets will likely remain related principally to the cost of doing business, including the status of logistical networks, infrastructure, and bureaucratic efficiency. Non-tariff trade barriers also remain prominent disincentives to the establishment of new trade links, including the potential for further border closures as a result of new waves of COVID-19 infections across the continent.