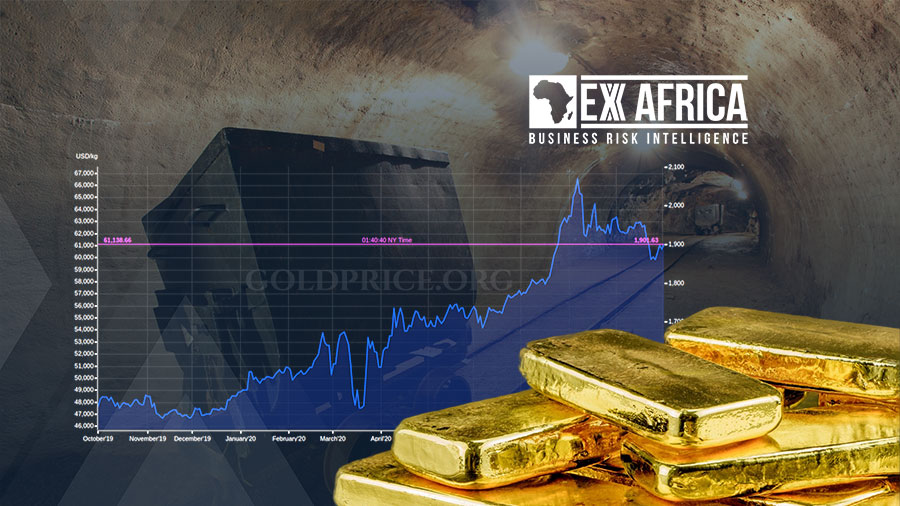 One potential bright spot for African economies this year has been the surge in the gold price which rose by 28 percent between January and August. However, tapping into these revenues is not as straight forward as it may seem. We unpack the opportunities and challenges in a number of key gold producing and exporting countries, from Ghana to South Africa.

The COVID-19 pandemic has brought unprecedented economic damage to many African economies, with the continent as a whole expected to dip into recession for the first time in 25 years this year. However, one potential bright spot has been the continent’s gold industry given the surge in the price of gold. Between 1 January and 14 August 2020, for example, gold prices rose by 28 percent. This stands in contrast to other commodities that have faced significant volatility and depreciation in 2020.

While an increase in the price of gold should benefit many African economies, there are a number of complicating factors that threaten to offset these gains. Firstly, COVID-19 itself poses a threat to gold producers and their ability to feed into government revenues given the implementation of travel restrictions and country lockdowns, which have hindered production. Secondly, as noted by the African Development Bank, the degree to which countries benefit from gold production is ultimately determined by the mining concession agreements into which they entered before the arrival of the pandemic. It is therefore possible for large-scale mining companies to benefit while African countries see little gain. Lastly, small-scale artisanal gold miners, who are active in the gold sector, have been heavily affected by COVID-19, hindering their ability to feed into local revenue generation as well.

Our latest analysis briefing unpacks the opportunities and challenges for African economies to tap into the surge in the price of gold this year. Country case studies are provided. 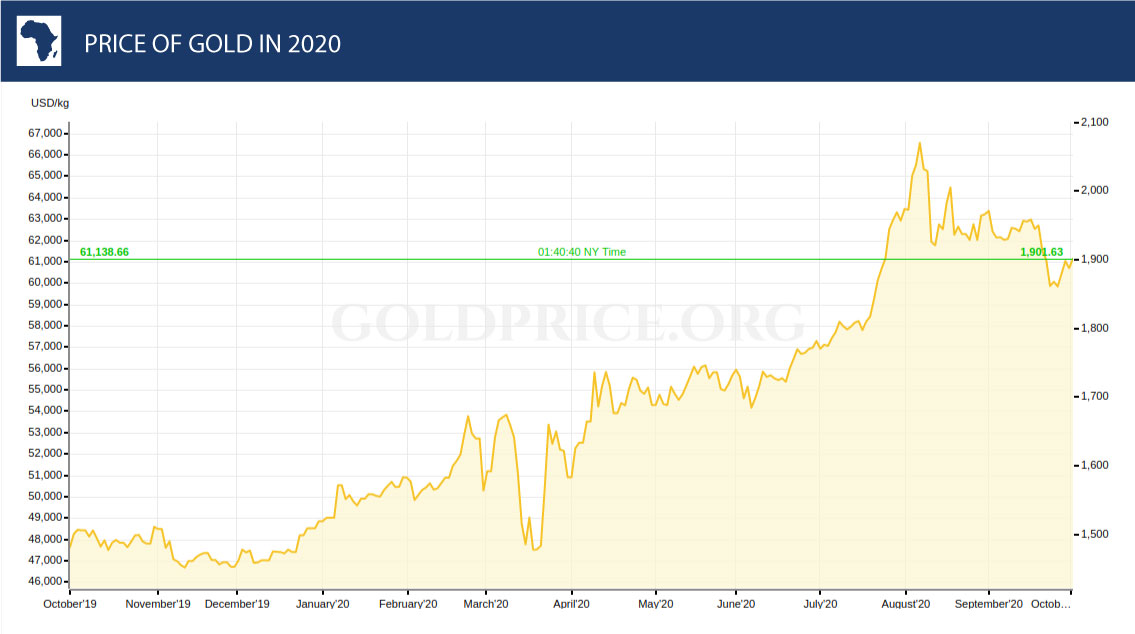 Snapshot of gold in Africa 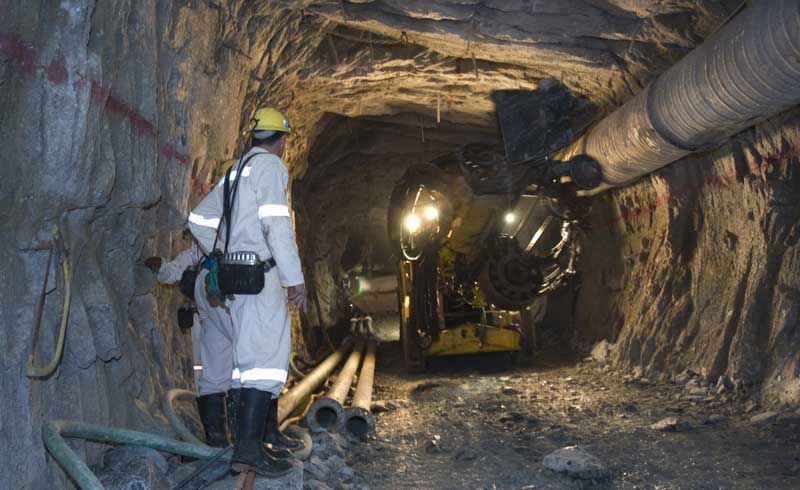 At least 20 countries in Africa engage in gold mining, accounting for around 22 percent of the total gold mined globally. The continent also boasts around 13 percent of the known global gold reserves, with South Africa holding the second largest reserves in the world.

As noted above, while the potential gain for African gold producing countries is high, a boost in fiscal revenues is not inevitable. There are numerous aggravating factors that need to be taken into account.

First and foremost, COVID-19 has posed a direct threat to commercial gold production and therefore revenues through the endangerment of employees, through travel restrictions and ultimately through total lockdowns. A mining sector analysis of suspensions in operations by S&P Global, showed that Africa was hard hit in terms of the number of suspended mining operations this year. According to McKinsey & Company, the most affected gold operations this year have comprised underground mines as opposed to open-pit sites where adherence to COVID-19 health protocols is possible. Across the industry, closures have reportedly lasted two weeks on average (to read more on COVID-19 and mining in Africa, see: COVID-19 AND MINING IN AFRICA: FROM FORCE-MAJEURE TO BUSINESS AS USUAL).

As part of the implementation of its lockdown, by the end of April 2020, South Africa had suspended operations at 54 mines. Although mining production resumed in May, as the country looked to kickstart its economy, production remained at half capacity for underground operations in order to observe health measures around social distancing.

The closure of the world’s deepest global mine, Mponeng, operated by AngloGold Ashanti serves as a case in point. Just three weeks into the resumption of mining, operations at the mine had to be halted in late May after 196 cases of COVID-19 were detected on site, even though operations were at half capacity. In response, 650 workers had to be tested. After more than a week of closure, operations were back at about nine percent of capacity, demonstrating the slow return to normal.

These shutdowns naturally led to a significant drop in output this year. By June 2020, all mineral sales were down by 14.2 percent year-on-year with gold being one of the biggest contributors, having dropped 45 percent over this period.

Another major consideration as to whether African countries will benefit from the increase in the gold price this year concerns each government’s share of its resource rents – such as royalties –as set out in their mining concession agreements signed before the start of COVID-19. The issue here is that several African governments are stuck in mining agreements with fixed royalty rates at low levels, hindering them from benefitting from the recent rise in prices. Moreover, in some instances, governments have entered into even lower royalty rates with specific mining companies than what is stipulated in their mining codes. The median royalty rate for gold in Africa is three percent.

Gold dominates Ghana’s mining sector with a substantial portion of gold mining conducted by small-scale operators. As noted in previous analysis briefings (see: GHANA: DEBT MANAGEMENT AS AN ELECTION TACTIC) Ghana was one of the first African economies to open up post lockdown and, importantly for this assessment, there was no suspension of gold production in the country. As such, according to the Ghana Chamber of Mines, the mining sector is confident that it will improve on last year’s production figures, despite COVID-19. This is also likely to mean that Ghana maintains its production advantage over South Africa this year.

However, despite this positive outlook, the Ghanaian government has acknowledged that it needs to review its legal framework for mining to increase this sector’s contribution to the economy. According to the Natural Resource Governance Institute, while the fiscal regime provides for fair government take on paper, bloated costs, profit shifting and reinvestments by companies that reduce dividends on state equity have weakened revenue collection for the government. Indicative of this, while oil production only started in December 2010, by 2013 oil revenues had already surpassed mining receipts. Ghana is currently reviewing its mining legal framework to amend this.

According to the African Development Bank, another factor that will hinder the ability of African economies to benefit from the surge in gold prices this year concerns the effect of COVID-19 on artisanal and small-scale mining (ASM). While most gold mined in Africa is from large-scale mines operated by multi-national companies, ASM plays a significant role in countries such as Sudan, Ghana, South Africa, Tanzania and Burkina Faso. These miners have been adversely affected by the restrictions on movement this year and have had to cut back their operations, affecting both production and their livelihoods. As such, it is likely that those in ASM will not benefit from the surge in gold prices this year.

Much like Ghana, Tanzania did not impose any restrictions on its mining sector during COVID-19. However, while the country’s four large scale gold mines are expected to benefit from the high price of gold, a number of challenges have presented themselves for those in the ASM sector. While the mineral trading centres that were established in 2019 for ASM remain open, at the height of the country’s lockdown these miners were hit hard as the dealers did not have access to export markets and international buyers due to global travel restrictions and Tanzania’s suspension of international flights. The miners appealed to government to buy their minerals, which was mostly gold. However, the government ruled out having the Central Bank buy unrefined gold but considered asking commercial banks to accept the gold collateral for loans (to read more on ASM in, see: TANZANIA: STRIKING A BALANCE BETWEEN ARTISANAL AND LARGE-SCALE MINING INTERESTS). 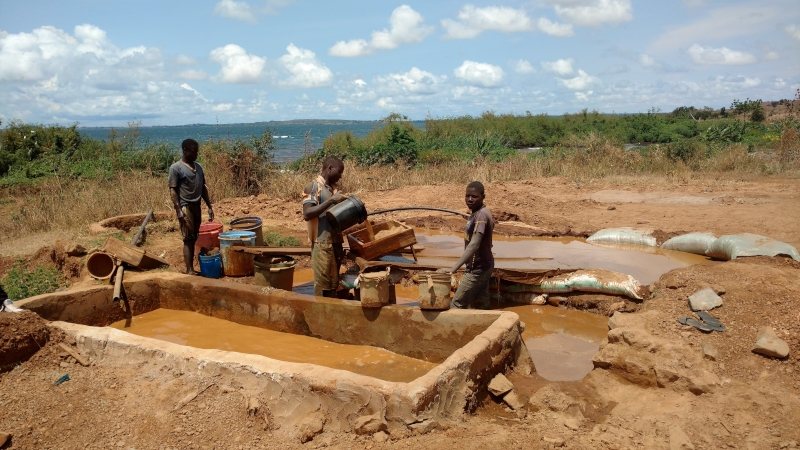 Nevertheless, according to Natural Resource Governance Institute, mining’s contribution (including gold’s contribution) to public finances this year should increase as the country is expected to benefit from the high price in gold. This in some part has to do with the signing of a deal between Canada’s Barrick Gold and the Tanzanian government in January 2020 in which the government took stakes in three gold mines, thus ending along-running tax dispute and setting a template for negotiations with other firms, such as AngloGold Ashanti, Shanta Gold, and Petra Diamonds. Coupled with the surge in the gold price, by early September, it was reported that the country’s foreign exchange earnings from the mineral rose by close to USD 1 billion in just one year. According to the Bank of Tanzania, on a month-to-month basis, Tanzania earned USD 266.8 million in July 2020 from gold exports, compared to the USD 129.4 million that was earned in July 2019. Overall, gold exports increased by 52.8 percent during the year to 31 July 2020. As such, gold overtook tourism as the country’s major foreign exchange earner in May 2020.

The rise in the gold price this year presents a significant opportunity for many African economies. However, as noted throughout this briefing, the extent to which gold producing economies benefit this year depends on a variety of factors, from regulations to the very nature of individual mines and whether they have allowed for adherence to health protocols and social distancing.

Beyond these concerns a number of other country risks threaten to undermine gold production in Africa. These include but are not limited to: