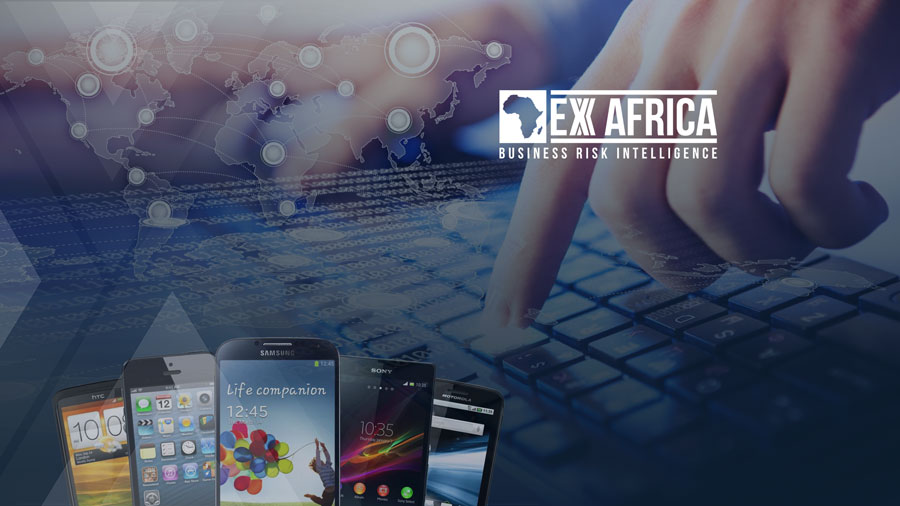 EXX Africa takes a closer look at the idiosyncrasies of some of the prominent internet shutdowns on the continent over the last year, exploring the causes and consequences of this repressive technological tactic.

The use of internet shutdowns by African governments to suppress popular dissent is becoming increasingly common. So far in 2019, there have already been reports of internet shutdowns in at least 12 countries. The states most affected usually have few internet providers, which makes it easier to implement a ban. Although such shutdowns may be contrary to local law, they are often detrimentally effective before they can be challenged in court. Furthermore, there is a lack of a binding international legal framework to hinder governments from acting with impunity.

These partial or near-total internet blackouts are most often implemented in anticipation, or in the wake, of anti-government protests, particularly around elections. However, governments also use targeted blocking of certain websites to restrict access to specific information during critical periods, such as national examinations. We explore some recent case studies from the past 12 months in this latest briefing. We also examine the impact such shutdowns have on commercial operations and the wider economy in African countries.

This briefing follows on from EXX Africa’s special report published at the beginning of the year and updates the key forecasts established in that report (See SPECIAL REPORT: THE COST OF INTERNET SHUTDOWNS IN AFRICA).

Internet blackouts have become a staple during the past 12 months in Sudan, particularly from December to April as protesters took to the streets to oust former president Omar Al Bashir from power. During this period, the government intermittently blocked access to Facebook, Twitter, Instagram, and Whatsapp. However, it was the near-total shutdown instituted in June until July, following particularly violent unrest in the capital, which garnered the most attention (See SUDAN: HARD-LINE DARFURI MILITIA SEIZE CONTROL OF THE CAPITAL). 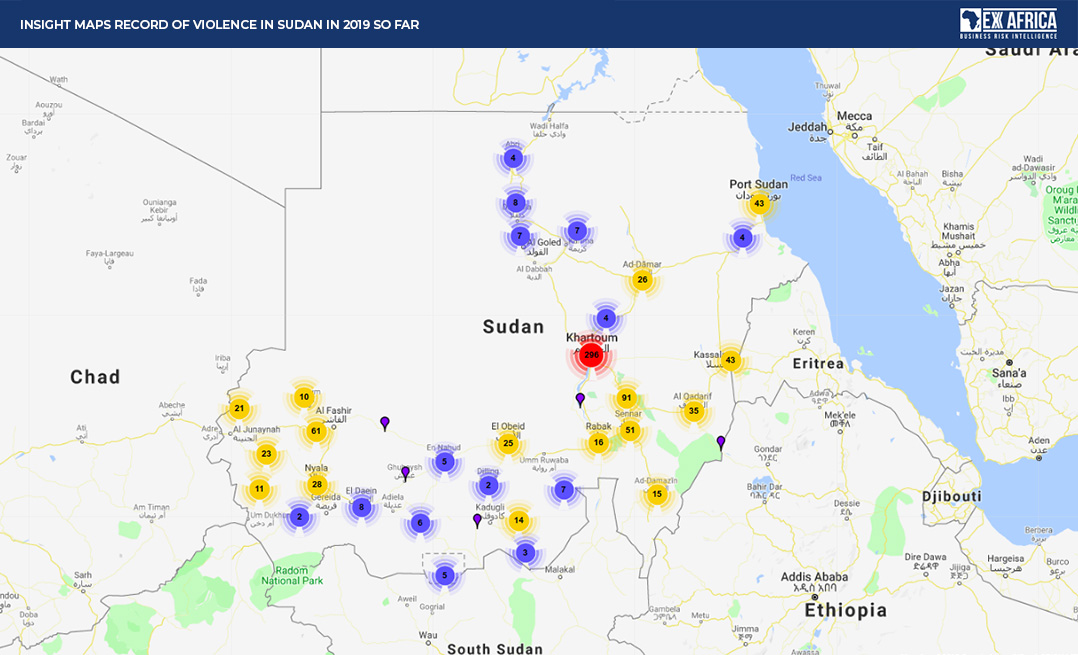 On 3 June, the Sudanese Transition Military Council ordered a partial internet shutdown amidst reported paramilitary attacks on pro-democracy demonstrators in Khartoum, during which an estimated 100 people were killed. To begin with, the ban targeted mobile networks before escalating to encompass fixed-line connections on 6 June. From 6 June to 9 July, a near-complete blackout was implemented, cutting the population off from the outside world. According to NetBlocks, a web freedom group, the internet disruptions under the rule of the Council were “more severe” than those imposed under Al Bashir at the time.

Locally, a lawyer, Abdel-Adheem Hassan, challenged the shutdown in court. On 23 June, Hassan was successful in ordering his telecoms operator, Zain Sudan, to restore connectivity. Yet, while his win was widely publicised and celebrated in the belief that the internet would be restored countrywide the next day, the operator only restored connection to his personal line.

According to Human Rights Watch, the near-total blackout in Sudan resulted in “wide-ranging harm”. Notably, it prevented activists and residents from reporting critical information regarding paramilitary forces, who were responsible for the attacks in Khartoum and previously for violent campaigns in Darfur, Southern Kordofan and the Blue Nile. Medical professionals further added that it made it difficult to organise ways to provide care.

The internet was only fully restored on 9 July after a further court challenge and a formal denouncement of the shutdown by the UN. 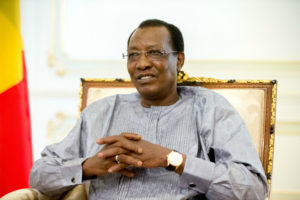 Although Chad has a very low internet penetration rate – with only 6.5 percent of the population reported as having access to the internet as of 2017 – the country was recently subjected to the longest-running internet blackout on the continent. In March 2018, President Idriss Déby announced a partial internet block that affected major sites including WhatsApp, Twitter, Instagram, YouTube, and Facebook, as he prepared to amend the constitution to remain in office until 2033. Sixteen months later, the ban was lifted on 13 July 2019 (See CHAD: CREATING A DE FACTO MONARCHY AMID MULTIPLE CHALLENGES TO POLITICAL STABILITY).

According to the government, the ban was implemented for security concerns over terrorism threats. While this justification was challenged in local courts, all appeals were ultimately unsuccessful. The government only lifted the ban following a sustained international campaign, led by Internet without Borders, which included diplomatic pressure, protest action, as well as the sponsorship of VPN access for Chadians.

Long-term social media blackouts are common in Chad. Previously, in 2017, the government cut connections for ten months following controversial elections. These long periods of internet blackouts have severe economic consequences for the already impoverished country. According to the ‘Cost of Shutdown Tool’ by NetBlocks, the 2017 blackout cost the government an estimated USD 163 million. It is estimated that the most recent blackout cost upwards of USD 253 million.

Moreover, during the blackout, the country’s largest ISP, Millicom, a Swedish telecommunications company, was subject to substantial adverse media in Sweden regarding the company’s alleged failure to honour its UN commitments to protect free expression. In the early days of the blackout, the company claimed that the outage was due to technical problems before later admitting that the government had ordered the blackout. In June 2019, Millicom completed the sale of its operations in Chad to Maroc Telecom, a Moroccan telecommunication company. Although part of wider strategic disinvestment from Africa, Millicom’s withdrawal was likely impacted by the reputational damage it faced following the Chad blackout.

Mauritania held its presidential elections on 22 June. When violent protests broke out on 23 and 24 June in the capital Nouakchott, challenging the initial election results, the government moved to disrupt the internet before instituting a near-complete ban on both mobile data and fixed-line connections by 25 June. All of Mauritania’s consumer ISPs – Mauritel, Chinguitel, and Mattel – were impacted by the government’s decision.

By suppressing social and news media, the government was able to provide its own account of the protests through a false propaganda campaign. On 26 June, the state television broadcaster paraded a group of foreign nationals who alleged to take full responsibility for the protests. Only after the internet services were fully restored on 3 July did a more accurate picture of the post-election situation emerge.

Contrary to state propaganda, a number of Mauritanian political activists were reported to have been arrested for participating in the protests. Moreover, it was revealed that during the blackout, the state had detained two prominent journalists without charges. Lastly, once connectivity had resumed, delayed reports of civil unrest in the immediate aftermath of the elections from outlying rural areas began to emerge (See MAURITANIA: NATURAL GAS AND MINING BONANZA WILL MITIGATE INVESTMENT RISKS).

Ethiopia and Somalia: Shutdowns for exams 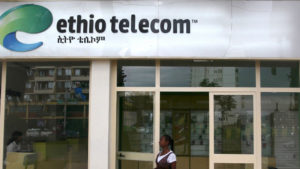 Internet shutdowns are not always instituted for political reasons. In Ethiopia and Somalia, they have also been implemented during national exams to prevent cheating. While internet access is occasionally restored in the evenings during these periods, the impact of such shutdowns is significant. According to Netblocks, a one-day shutdown of the internet costs Ethiopia at least USD 4.5 million and has a long-term impact on investor confidence in the host country.

The latter is particularly true in the case of Ethiopia as newly elected Prime Minister Abiy Ahmed has sought to privatise the national telecommunications provider, Ethio Telecom. Nevertheless, while such government interference is likely to concern potential investors, the anticipated establishment of an independent regulator is expected to provide appropriate checks and balances (See 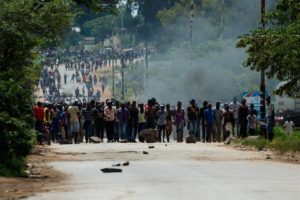 Protests in Zimbabwe have also been met with internet shutdowns in recent months. In January 2019, for example, the government imposed a “total internet shutdown” amid violent protests against a dramatic fuel price increase. Access to the internet and social media apps like Facebook, Twitter and WhatsApp were intermittently blocked as the country’s largest telecom company, Econet, sent customers text messages relaying the government’s orders and calling the situation “beyond our reasonable control”. As the situation has continued to decline over the past few months, with reports of load shedding of up to 16 hours a day, food shortages, and the outlawing of anti-government protests, further unrest and associated internet clampdowns are expected.

Tunisia is scheduled to hold the first round of its presidential elections on 15 September 2019. The country has enjoyed relatively free access to the internet since widespread blackouts during the Arab Spring in 2011. After transitioning into a democracy, a key test for the budding democracy will be whether or not these elections are free and fair. Any internet shutdowns during the election season, which the government would likely justify by appealing to the threat of terrorism, will instead be an indication of the state’s democratic integrity.

Burundi is expected to hold presidential and parliamentary elections in May and June 2020. In 2015, as President Pierre Nkurunziza, sought to seek a third term ahead of the country’s elections, messaging services including Facebook, Whatsapp,Twitter, and Tango were shutdown. Actions by the government since then have further pointed to little tolerance for media freedom. In March 2019, for example, the government renewed its suspension of Voice of America and withdrew the BBC’s operating license. As such, it is highly likely that next year’s elections will be accompanied by an internet shutdown and near-total blackout.

Tanzania is expected to hold multiple elections in 2020, including presidential and parliamentary votes. With current President John Magufuli having cracked down on online media over the last year (See EXX Africa Special Report: The Cost of Internet Shutdowns in Africa) it is likely that he may move to control messaging ahead of and during the elections by implementing partial bans on the internet and removal of anti-government sites. Indeed, during an August 2017 meeting with leaders from China, the Tanzanian Deputy Communications Minister praised his counterpart for blocking social media platforms and replacing them with “homegrown sites that are safe, constructive and popular”.

Each case of those in power using internet blackouts to control information, and therefore people, has its particularities. However, one constant in all of these cases is the economic impact of the blackouts at both a macro- and micro-economic level. Decreased productivity, lack of email communication, disruption to online sales, decreased online advertising; these are a few examples of the consequences of internet shutdowns for commercial entities. At a national level, a recent Global Network Initiative report indicates that the loss of internet connectivity has a pronounced effect on a country’s daily GDP. The report estimates that an average high-connectivity country stands to lose at least 1.9 percent of its daily GDP for each day of a total internet shutdown. For an average medium-level connectivity country, the loss is estimated at one percent of daily GDP, and for an average low-connectivity country, the loss is estimated at 0.4 percent of daily GDP.

Activist groups like NetBlocks and Global Network Initiative are creating awareness of both the prevalence of internet shutdowns around the world and their associated economic impact. This awareness is vital for the media, NGOs, and international organisations to try to combat the increased use of shutdowns across the African continent. Indeed, internet access and the guarding against the abuse of it by those in power are fast becoming a key frontier for the protection of international human rights. However, the fight against the abuse of freedom of expression is expected to be prolonged in Africa, as more and more leaders are turning to this form of control to suppress dissent and manipulate access to information. In the interim, businesses and the wider economy are expected to bear the brunt of these decisions.