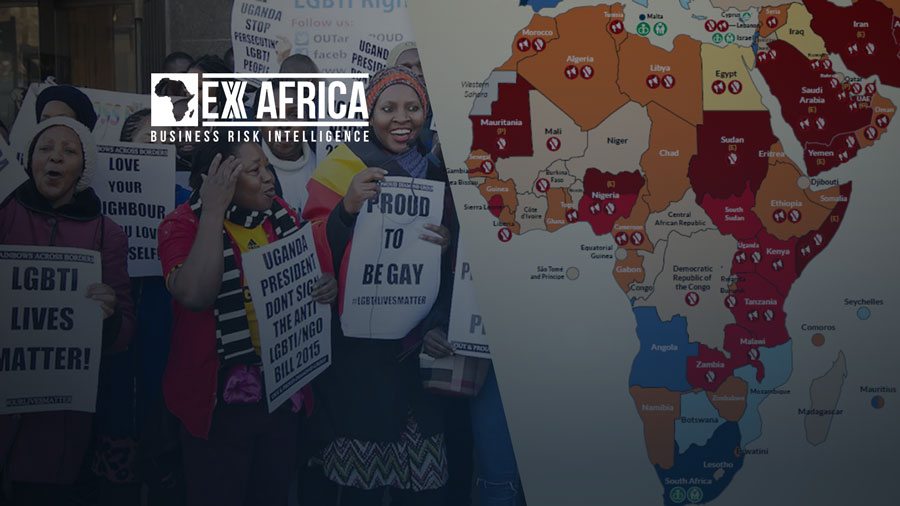 Same-sex activity is outlawed in over 30 states in Africa with sentences ranging from minor fines, years’ imprisonment, and even death. EXX Africa assesses some of the highest risk locations across the continent for LGBQT+ communities, business travellers, and corporate expatriates.

The fight for the rights of Lesbian, Gay, Bisexual, Queer, and Transgender (LGBQT+) communities in Africa has ebbed and flowed over the past decade. Where there have been significant gains – such as with Angola and Botswana legalising same-sex marriage last year – there have also been indications of regression in some states. In the last quarter alone, Zambia expelled the US ambassador to the country over public statements questioning the country’s anti-gay laws, a prominent LGBQT+ activist was killed in Uganda in what many suspect to be a hate crime, and Nigeria put 47 men on trial in the very first test of its anti-gay laws.

In our latest analysis briefing, EXX Africa profiles the types of threats facing LGBQT+ communities in Africa before ranking some of the highest risk locations for local communities, expats and travellers in terms of both state laws and community attitudes.

As indicated by the UN Office of the Commissioner for Human Rights, LGBTQ+ communities are at risk of a number of abuses around the world. These include, but are not limited to: murder, rape, mob attacks, abuse by police and prison officials, criminal sanctions, arrest, imprisonment, blackmail, harassment, humiliation, discrimination, death threats, being fired from their job, being evicted from home, or being refused medical treatment. While abuses can be tracked globally, sub Saharan Africa remains one of the “most hostile regions”, according to the South African Institute of Race Relations.

A quick review of some high-level numbers and survey results depicts this state of affairs.

As of June 2019, for example, 32 out of 54 African countries outlawed same-sex activity. Same-sex activity carries a prison sentence of one or more years in countries like South Sudan, Liberia, Togo, Cameroon, Kenya, Tanzania, Uganda, Eritrea, Ethiopia, the Comoros, and Zambia, while such activity is punishable by death in Sudan, Mauritania, Somalia, and in some states in Nigeria. The following map demonstrates these offences and associated protections across the continent, as of December 2019. 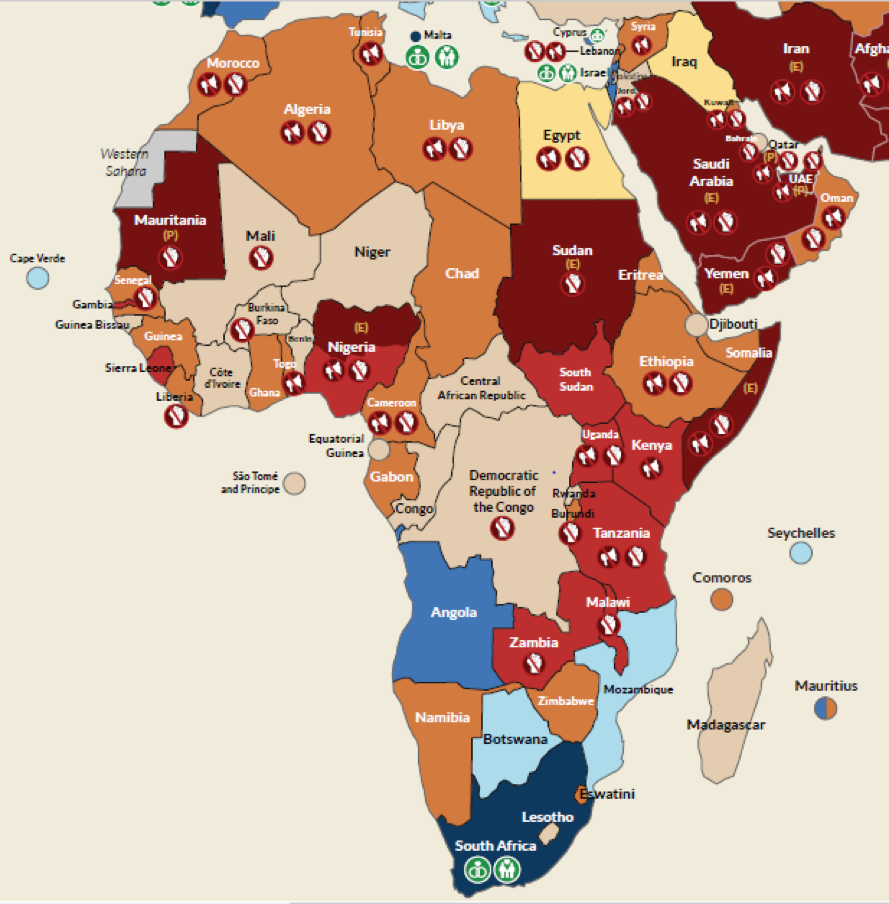 This lack of tolerance towards LGBQT+ communities is reflected not just at the level of the state or through regulations but at the community level as well. According to findings from a 2016 Afrobarometer study, while Africans display a high tolerance for people from different ethnic, religious and national backgrounds, the same does not exist in terms of attitudes towards these communities. Only 21 percent of Africans surveyed indicated that they would either like or be indifferent to having gay people as neighbours. Moreover, only in Cape Verde, South Africa, Mozambique, and Namibia did the majority of the population display high tolerance for gay people.

Taking into account this dual lack of tolerance in many African states, we have profiled some of the highest risk locations for LGBQT+ locals, expats, staff and travellers across the continent. Country profiles have been derived from Human Rights Watch alongside other sources. 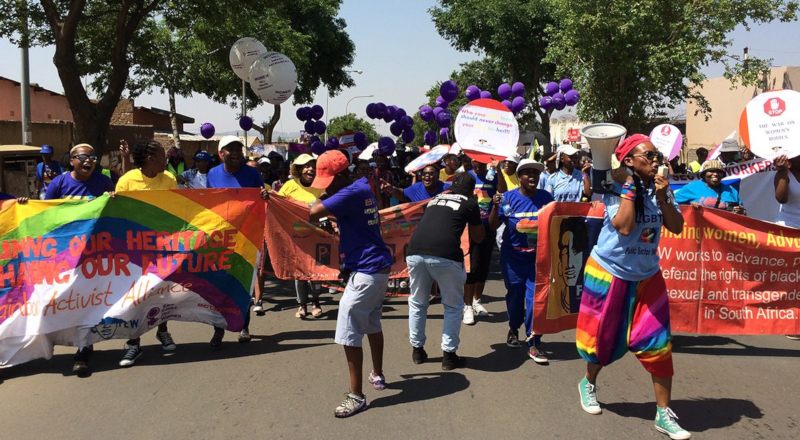 In addition to the aforementioned countries, the following countries are also deemed high risk location for LGBQT communities – primarily as a result of the criminalisation of same sex relations and/or gender expression and imprisonment for such conduct: Algeria, Cameroon, Egypt, eSwatini, Ghana, Mauritius, Morocco, Namibia, Senegal, Togo, Tunisia, and Zimbabwe.

Given the high risks associated with being LGBQT+ in the majority of African countries, such individuals are urged to conduct extensive research into local customs and laws before embarking on any travels and deployments.

Such research is even required when travelling to LGBQT+ friendly locations. For example, while South Africa is praised for being one of the most LGBQT+ friendly locations across not just the continent but globally (given its progressive state laws), studies have revealed that LGBQT+ people are three times more likely to be attacked or subjected to hate crimes in its rural province of the Eastern Cape followed by KwaZulu Natal and Limpopo. Moreover, the South African Institute of Race Relations has further revealed that four out of 10 LGBQT+ South Africans know of someone who has been murdered for being – or suspected of being – part of the LGBQT+ community.

In general, LGBQT+ individuals are advised to refrain from showing physical shows of affection in public, to consider clothing options as gender expression is criminalised in some locations, to avoid using associated dating apps in foreign countries (as the police have been known to carry out entrapment campaigns), to be wary of ‘newfound friends’, and to take extra precaution in rural areas.