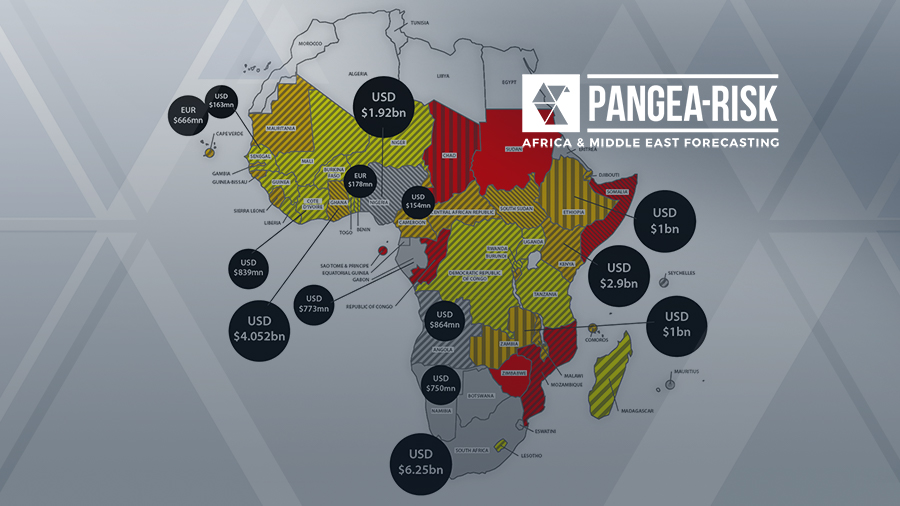 Based on quantitative analysis, large external borrowers Ghana, Kenya, and Ethiopia are most likely to default on their Eurobond repayments in the five-year outlook. In total, Africa needs to make USD 21.5 billion in external bond repayments over that period, while debt servicing costs are rising unsustainably. PANGEA-RISK assesses key indicators, including debt servicing and international bond maturities, to forecast Africa’s sovereign debt default risks over the next five years.

END_OF_DOCUMENT_TOKEN_TO_BE_REPLACED 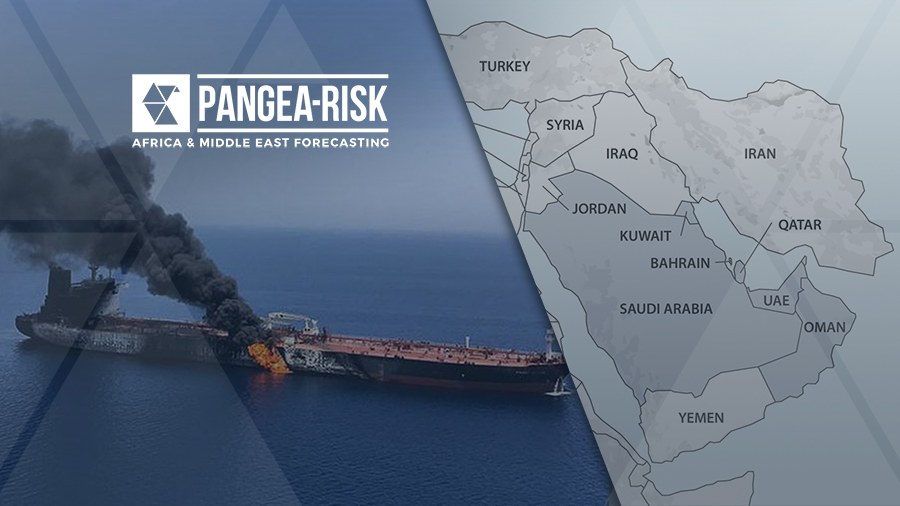 The six-member states of the Gulf Cooperation Council (GCC) are well-positioned to benefit in the face of the Russia-Ukraine war that has pushed up oil and natural gas prices. The region is looking to capitalise on these global events to grow investment in untapped reserves and field redevelopments previously considered commercially unviable. The main issue of concern remains uncertainty regarding negotiations on Iran’s nuclear programme, and the associated security risks. In the event political pressures in the region rise, so do the associated security and maritime risks, which add further complications to the cost of doing business in the region that is unlikely to abate in 2022.

END_OF_DOCUMENT_TOKEN_TO_BE_REPLACED 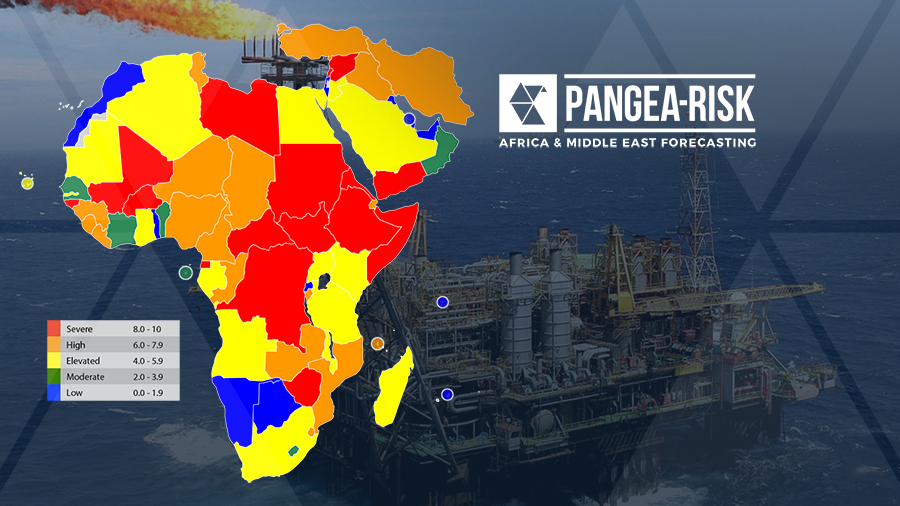 Some African oil producers are witnessing an unexpected economic revival, while other crude exporters fail to benefit from the commodity super cycle. For many African countries, the impact of the “crisis on top of a crisis,” according to the IMF, could be worse than the global financial crisis 15 years ago. Low-income countries urgently require financial assistance and debt relief. However, Russia and its diplomatic voting bloc may hold up any initiatives at multilateral institutions, while few western countries agree on further SDR issuance at the IMF. Therefore, the provision of effective and sufficient financial support by multilaterals may be delayed or frustrated, thus potentially allowing Africa’s food insecurity and debt sustainability problems to deteriorate. At least two more African countries may default on their sovereign debt in coming months.

END_OF_DOCUMENT_TOKEN_TO_BE_REPLACED 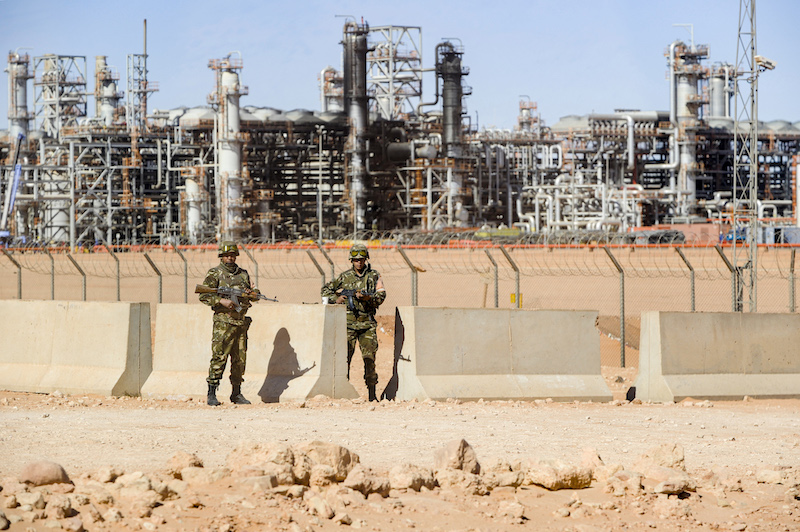 Algeria’s gas output has become more important as part of supplies to European countries, following Russia’s invasion of Ukraine. The implications for Algeria’s immediate economic outlook have been more clearly positive as higher gas prices will help keep Algeria’s economy afloat. This positive initial picture may grow more mixed in the months ahead. A wide fiscal deficit, rapidly falling reserves, and limited room for fiscal reform, owing to high levels of social instability, mean that current government spending may temper economic discontent that fuels protests in the short term; however, this is not likely to change the long-term situation for the impoverished population.

END_OF_DOCUMENT_TOKEN_TO_BE_REPLACED 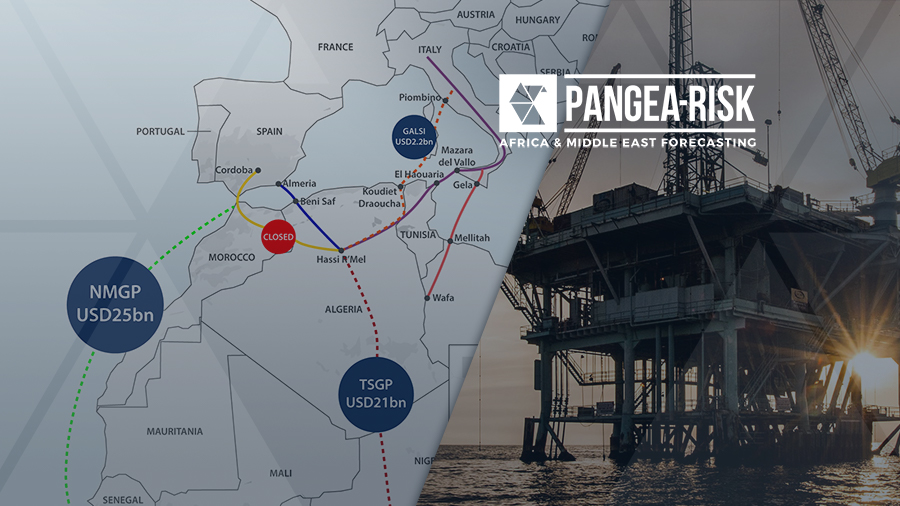 European countries are engaged in frantic diplomacy with North African states and other African natural gas producers to secure new gas supply contracts in an increasingly competitive market. At least USD 50 billion in new pipeline investments may be signed off this year. Bilateral disputes and long-time Russian affiliations are complicating such efforts and European governments will need to offer concessions on food security, vaccine manufacturing, and climate change targets to secure African support. Large African gas producers such as Algeria, Egypt, Libya, and Nigeria stand to benefit from the global gas supply shock in various divergent ways.

END_OF_DOCUMENT_TOKEN_TO_BE_REPLACED 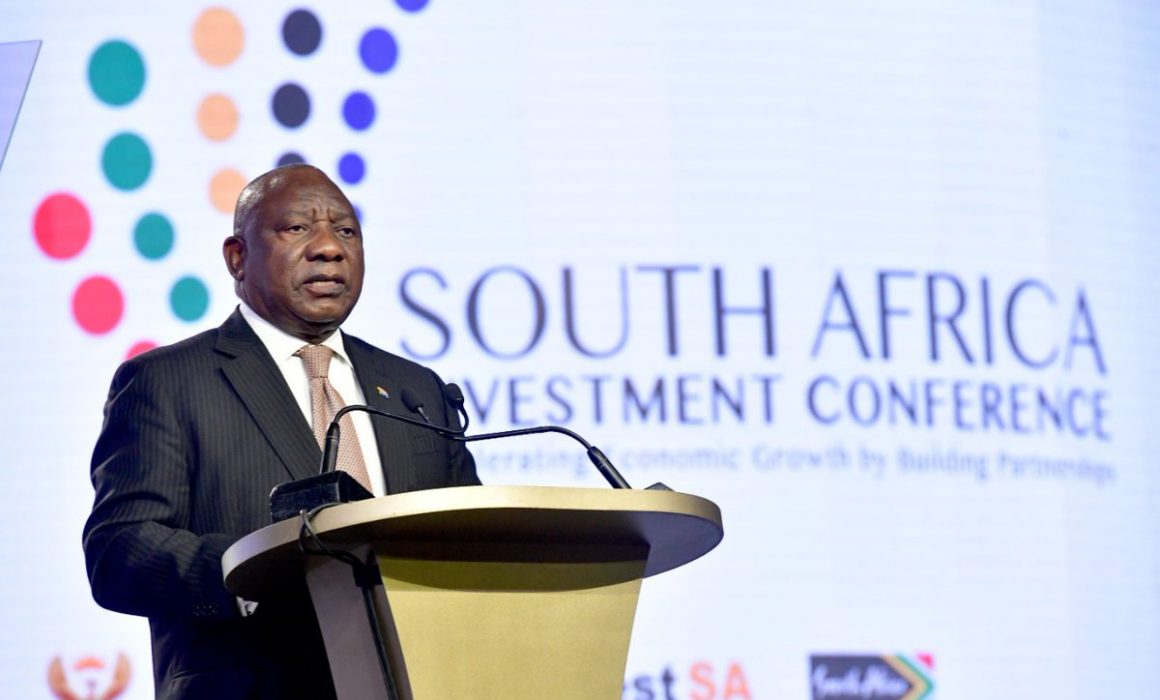 South Africa’s currency, stocks, and bonds are outperforming peers, and the government is riding a wave of economic optimism to attract fresh investment, particularly in the mining and energy sectors. Nevertheless, entrenched economic weaknesses remain prevalent and the current commodity boom may have short-lived benefits for the country, especially as fuel and food prices continue to rise.

END_OF_DOCUMENT_TOKEN_TO_BE_REPLACED 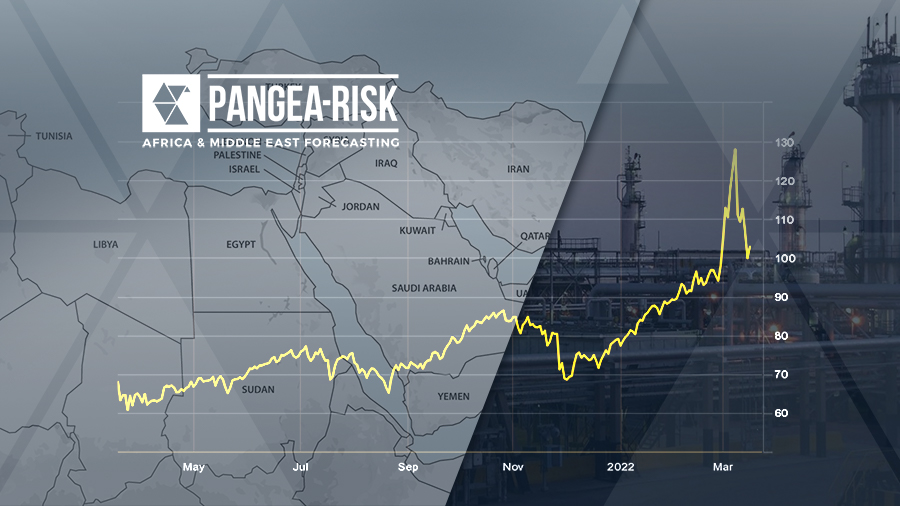 Russia’s invasion of Ukraine and the sanctions that followed have led to a significant change in the oil outlook. Whilst current sanctions are not targeting Russian energy exports, the risk of further escalation indicates the potential for large disruptions to oil flows. An extended period of geopolitical tension and elevated risk premiums across all underlying commodities is now expected, with far-reaching implications across global commodity markets. The impact on growth and inflation will vary significantly across the world, as well as in the Middle East and North Africa. Higher energy prices are a boon for many regional exporters, but could be detrimental for much of the region’s non-oil economies.

END_OF_DOCUMENT_TOKEN_TO_BE_REPLACED 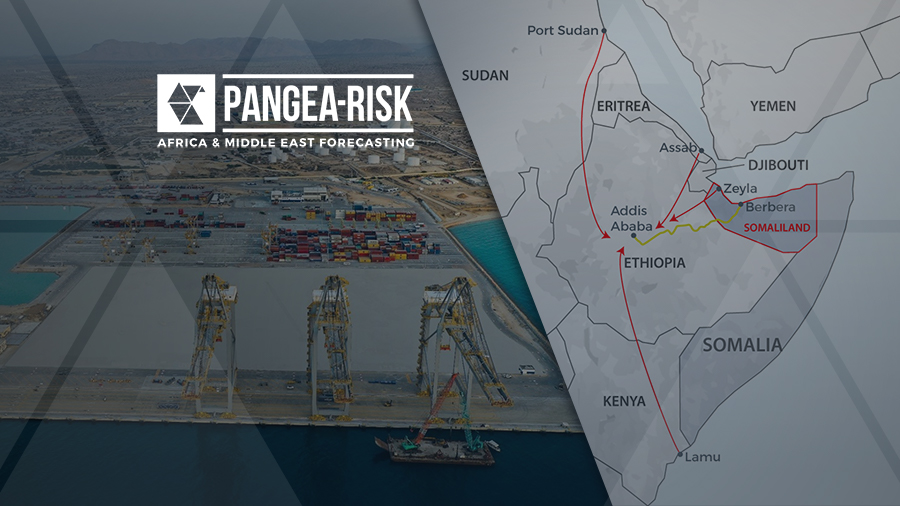 One of the world’s most functional self-declared independent states, Somaliland, is leveraging superpower rivalries in the Red Sea to its advantage and is attracting significant foreign direct investment in the port logistics, infrastructure, telecoms, and oil sectors. Next month, the US is set to agree on a military cooperation deal that would vie with Chinese and Russian influence in the region, while also providing security assurances for the strategic trade corridor connecting Somaliland to Ethiopia.

END_OF_DOCUMENT_TOKEN_TO_BE_REPLACED 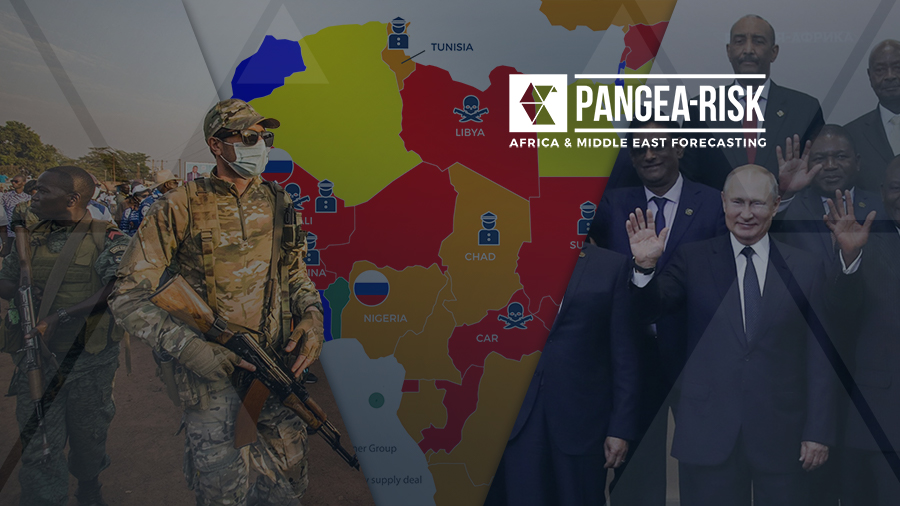 While the world’s attention is focused on Russia’s actions in Ukraine, PANGEA-RISK assesses the expansion of Russian economic and military interests in Africa. Russia has been pursuing a more subtle and long-term approach in Africa than elsewhere, yet some of the tactics used on the continent are reminiscent of Russia’s broader foreign policy and use of proxy forces.

END_OF_DOCUMENT_TOKEN_TO_BE_REPLACED 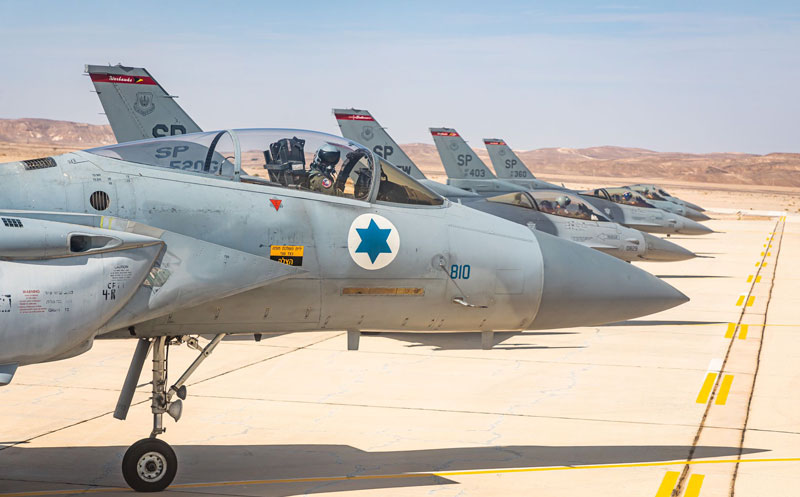 Yemen’s Iran-backed Houthis have intensified their regional missile and drone attacks and are increasingly focusing on the UAE rather than neighbouring Saudi Arabia. The airstrikes in January are likely driven by the group’s territorial setbacks in Yemen and are likely retaliation for the UAE’s renewed involvement in the conflict. This may now increase US military and diplomatic support for the Saudi-led coalition in Yemen and put fresh pressure on Iran-backed Houthi rebels. The Houthi targeting of the UAE could provoke a cycle of such strikes that undermines the emirates’ reputation as a peaceful business hub, which could have a dramatic impact on tourists and investors. The events have alarming echoes of 2019 when critical energy flows from the region were threatened, and Saudi oil infrastructure was attacked.