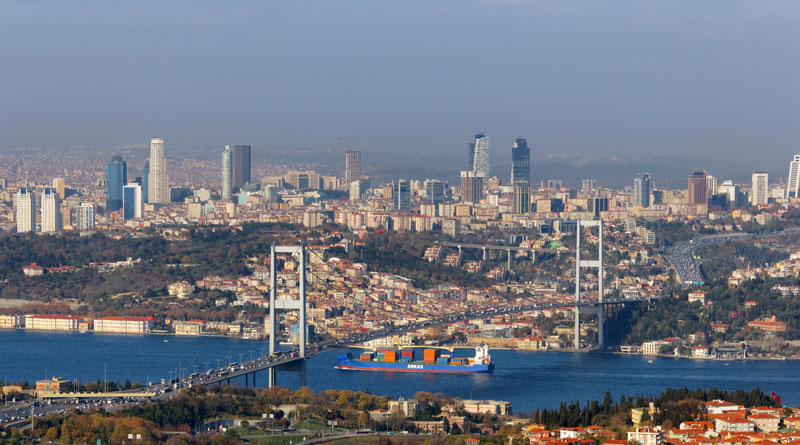 Turkey’s economic policy is again at a crossroads, with currency volatility reaching a record high on concern about central bank reserves, foreign borrowing needs, and a surge in coronavirus cases that imperils tourism revenue. The leadership’s unorthodox economic policies have long fuelled unease among investors, who have pulled money out of Turkey in recent years over concerns about Turkey’s stability.

Turkey’s economy is facing fresh turmoil after the surprise ouster of the central bank governor by President Recep Tayyip Erdoğan in March added another chapter to years of unpredictable economic policy, disturbing foreign investors and possibly sowing the seeds of a financial crisis.

The lira plunged as much as 15 percent after President Erdoğan dismissed Naci Ağbal, a respected policy hawk, and appointed Şahap Kavcıoğlu, who – like Erdoğan – is a critic of tight monetary policy and has espoused the view that it causes inflation, contrary to conventional economic wisdom. The currency, among the worst performers in emerging markets in 2021, reached 8.425 versus the US dollar, nearing its lowest level of 2021 and close to its record 8.58 reached in early November 2020.

Turkey’s economy grew almost 6 percent in 2020, making it one of the two countries in the G20 to achieve growth in the pandemic-hit year. However, the third dismissal of a governor in less than two years has again raised serious doubts over the Central Bank of Turkey’s (CBRT) independence. PANGEA-RISK assesses that Turkey has a poor track record of policy consistency and often resorts to stop-go policies (see TURKEY: MAJOR ECONOMIC LEADERSHIP RESHUFFLE MASKS DOMESTIC CHALLENGES). Debts are now soaring, inflation is rising, and the currency is near record lows, raising concerns about President Erdoğan’s economic stewardship, and the impact of the ongoing economic turmoil on the country’s political stability.

A curveball to investor confidence 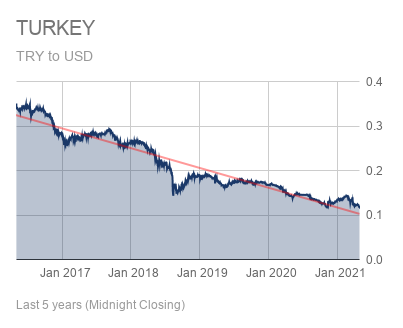 The latest changes and the ensuing turmoil came as a shock to investors who had placed a degree of trust in Ağbal and his rate hikes to keep their investments in Turkey and even commit to new investments. Before the sacking, foreign investments in stock shares were worth nearly USD 29 billion and the lira traded at 7.2 to the dollar on 19 March. Additionally, the more than 50 percent increase in Turkey’s risk premium is already a telling sign of how Ağbal’s sacking – without warning – has rattled foreign investor confidence.

The uncertainty also stems from the rapid swings in the central bank’s benchmark policy rate as a result of switches between loose monetary policy to stimulate growth and tightening to defend the lira. The CBRT grew the one-week repo rate from 17.75 percent to 24 percent in September 2018, before cutting it down in decrements to 8.25 percent in May 2020. Since then, the rate has been moved up rapidly, reaching 19 percent in March. It was the latest in a series of rate hikes under Ağbal that had helped the Turkish lira recover to some extent, slow dollarization, and restore some confidence in Turkey’s economic management. The sacking of Ağbal was even more shocking because he is known as an Erdoğan loyalist who has previously served as a finance minister.

Adding to Turkey’s woes, the country is now seeing record high daily COVID-19 cases – the seven-day moving average is around 60,000, one of the highest tallies in the world. Continued growth in COVID-19 case numbers is likely to undermine the government plans to fully reopen economically. Turkey’s tourism revenues in 2020 totalled USD 12.6 billion, a 65.1 percent decline from the previous year.

On 1 March, Turkey had gradually lifted COVID-19 lockdown restrictions, with cafes and restaurants permitted to reopen fully for the first time since early December. The government intended to ease restrictions gradually to permit the revival of the service sector, especially benefitting tourism (which accounts for more than 11 percent of GDP) and hospitality. However, following the reopening of shops and restaurants, COVID-19 cases have increased dramatically, with 39,302 new cases on 31 March alone, the highest level since the beginning of the pandemic.

The country is now under partial lockdown, reinstating a weekend curfew in 58 out of 81 provinces, while only around 9 percent of the population have received two vaccine doses because the main supplier, China’s Sinovac Biotech, is significantly behind the delivery schedule. High coronavirus numbers are tarnishing Turkey’s hopes to generate USD 20 billion this year from tourism – a much-needed source of revenue that could bolster the depleted central bank foreign exchange (FX) reserves. 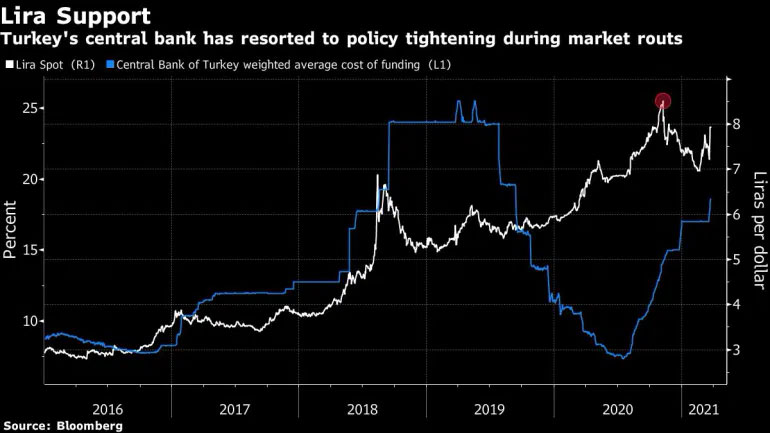 Ever since gross FX reserves reached a peak of USD 114 billion at the end of 2013, they have been on a volatile downward path, mainly owing to frequent FX market interventions by the CBRT to stabilise the exchange rate of the lira, as well as occasional capital outflows. At the end of 2019, reserves stood at USD 79 billion. Then they dropped by -52 percent to just USD 38 billion in September 2020 due to capital outflows and CBRT intervention in the wake of the COVID-19 crisis. Following the sharp monetary tightening in late 2020, reserves recovered modestly to USD 43 billion in January 2021. 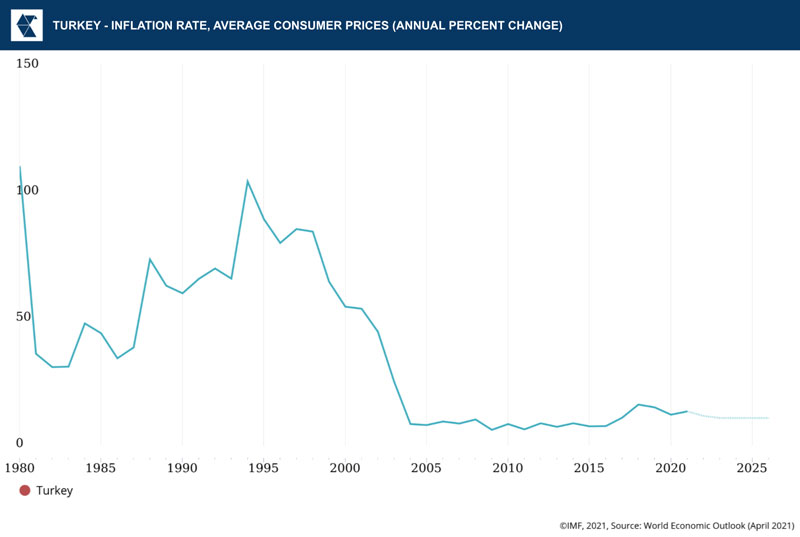 Yet, at this level, they are covering less than three months of imports or less than 30 percent of the external debt payments falling due in the next 12 months. Inflation also remains stubbornly high (15.6 percent in February 2021), and is expected to only gradually decrease in the coming months, due to persistent expectations of high inflation and ongoing price pressure triggered by a weak lira exchange rate.

In the case of a deterioration in the global risk sentiment and further depreciation in the lira by around 5 percent, inflation may peak at 18 percent to 19 percent by June, where the current 19 percent policy rate level may not suffice in providing sufficient positive real return in the coming months. Given that rate hikes are not being considered, if inflation further exceeds 19 percent, the lira will come under renewed pressure. 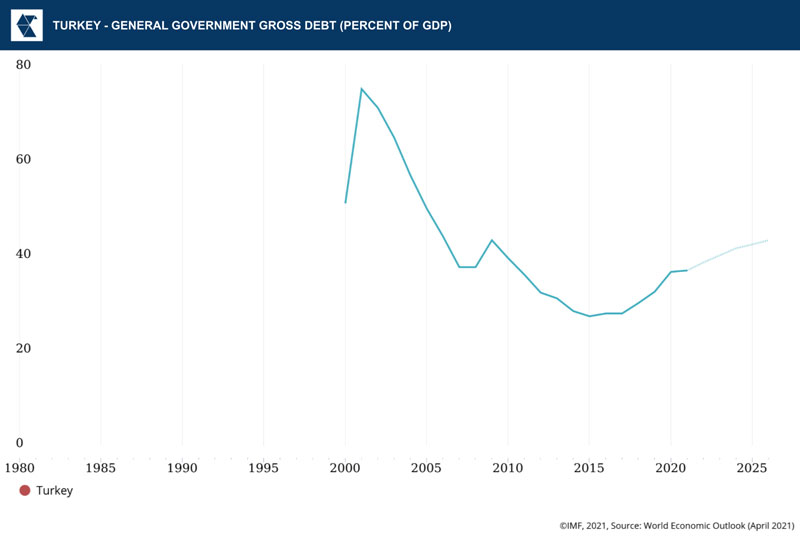 Turkey is heavily reliant on foreign capital to fund its natural current account deficit and the external financing requirements of its corporate and financial sectors. A direction change was witnessed with external financing requirements reaching USD 188.8 billion (27 percent of GDP) at end-2020 due to an increasing reliance on short-term external funding by the public sector (swap deal with Qatar central banks as the major driver) and the private sector (attributable to bank borrowing and to trade credits).

As such, Turkey is expected to continue to demonstrate its willingness and ability to service its foreign and domestic debt obligations. Turkey’s debt burden is comparatively low at 37 percent of gross domestic product. The equivalent level for Lebanon and Argentina is 172 percent and 97 percent, respectively. While the success of the policy framework will likely lengthen the investment horizon of foreign investors in the period ahead, it will take time and current short-term flows will add to overall external vulnerability, raising concerns amid already low reserves. However, short-term external debt repayment obligations seem currently manageable.

Overall, the economy is expected to grow by between 3.5 and 5 percent in 2021, according to estimates, supported by the ongoing global recovery. Industrial production is forecast to increase by more than 9 percent this year, while exports will grow about 11 percent, due to resurging external demand and an expected rebound of tourism in the second half of 2021.

High inflation, and a more restrictive external financing backdrop will prove obstacles to meaningful growth. Additionally, tighter domestic monetary policy and a tightening of fiscal support will make Turkey more dependent on external demand to drive its recovery. As inflationary pressures remain elevated, businesses will see profit margins restricted, and domestic demand growth is not likely to rebound to 2017 levels in the near term. Current account risks are expected to remain elevated, but a recovery in goods exports and tighter domestic credit conditions are likely to support a gradual improvement in the current account balance.

The CBRT’s FX reserves are way too low to defend the lira if needed. Should serious financial market turbulence re-occur in the near term, the CBRT may at some point need to revert to capital controls in order to defend the lira or release the currency into free fall. Also, investment growth will be affected by persisting economic policy uncertainties. Whether or not the capital outflows from 2020 can be reverted in 2021 depends on investor sentiment towards both Emerging Markets in general amid the ongoing pandemic as well as towards Turkish politics and policies in the coming year. 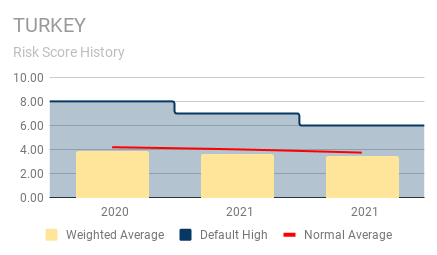 A combination of geopolitical tensions, investor risk aversion and depleted foreign-currency reserves has left the country vulnerable to external shocks. Turkish assets are particularly sensitive to strains in relations with the US and the EU due to the fallout from possible sanctions and economic threats. A dispute in 2018 with then-President Donald Trump sparked a lira crisis and recession, similar to the ongoing situation.

The US and EU continue to float the possibility of sanctions against Turkey over policy disagreements. The US wants Turkey to abandon the S-400 missile system it purchased from Russia, while the EU wants Turkey to back off from its confrontational approach and aggressive energy exploration activities in waters claimed by Greece in the eastern Mediterranean. Tensions with the US and the EU could lead to further sanctions or weaken foreign direct investment (FDI) over the coming months, leaving Turkey more reliant on boosting domestic savings or borrowing through more volatile funding lines, such as financial markets.

The hawkish stances of President Erdoğan will weigh on FDI levels and could keep external financing costs elevated. The lira shed 3.5 percent between 24 and 26 April as it became clear that US President Joe Biden would officially recognise the 1915 killings and deportation of Armenians in the Ottoman Empire as a genocide. However, Turkey maintains a military alliance with the US, which has consistently supported the country in multilateral institutions such as the International Monterey Fund (IMF). The country’s NATO membership is a strong deterrent to external security threats and limits the potential for a complete break in ties with the US and EU.

Domestically, President Erdoğan remains Turkey’s most popular politician, although his support levels have seen a slow but steady decline since late 2018. The local elections on 31 March 2019, held during an economic recession, saw Erdoğan’s Justice and Development Party (AKP) lose key municipalities, including Istanbul and Ankara, to the opposition. The management of a worsening economic performance will likely be pivotal for the future trajectory of Erdoğan’s domestic support.