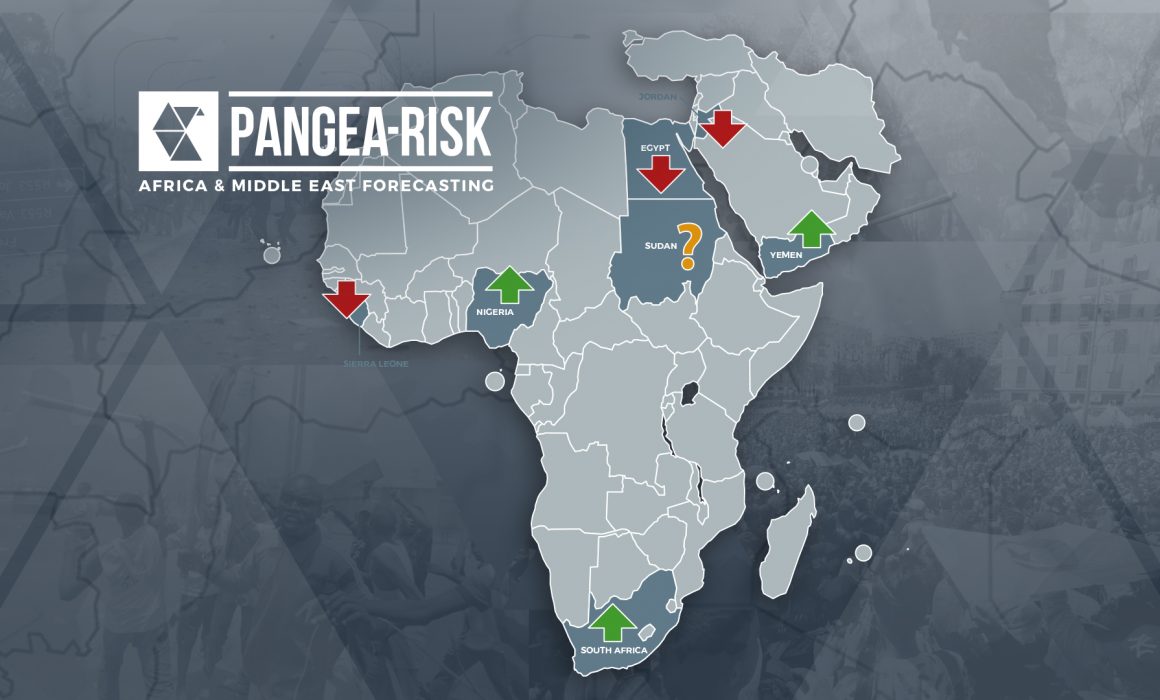 Two of Africa’s largest markets are set for a healthier 2023, based on our forecasts. Unavoidable economic reforms, a looming currency devaluation, and a crackdown on oil theft should improve post-elections Nigeria’s risk outlook. Meanwhile, South Africa’s president is running out of excuses not to address power outages, corruption, and economic reforms. In the Middle East, a peace deal may become reality as a tentative truce in Yemen continues to hold. However, rising debt in Egypt and stubbornly high inflation in Jordan and Sierra Leone may drive a significant deterioration in the country risk rating in 2023. Pangea-Risk picks its country risk “winners” and “losers” and reveals a “wildcard” country to watch for the year ahead. 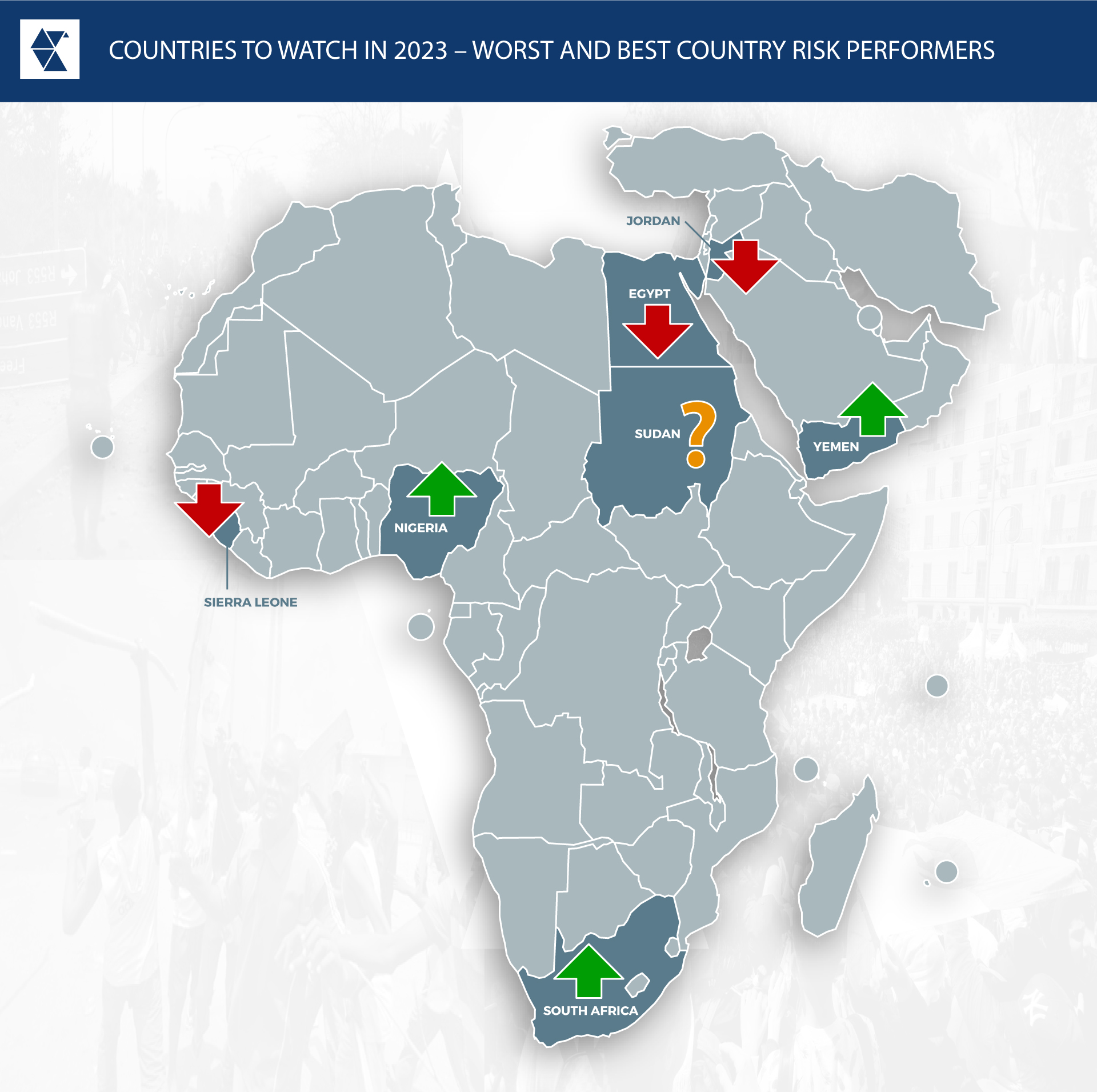 Since 2015, Pangea-Risk has selected a set of countries where we expect to see the greatest improvement in the country risk outlook over the course of the coming year. We select our favourite destinations for investment based on commercial interest among our clients, local source intelligence, and perceptible improvement in our proprietary country risk forecasting ratings. The selection showcases some of our key risk forecasts for the year ahead and flags potential new investment and trade opportunities. We also identify those countries where we expect a significant deterioration in the business climate based on the same political, security, and economic indicators of risk.

Last year, we spotted opportunities in Republic of Congo, Zambia, and the wider GCC region (see SPECIAL REPORT: COUNTRY RISK “WINNERS” AND “LOSERS” FOR 2022). Over the past 12 months, the risk rating for these three countries have indeed significantly improved. Congo’s default high risk score dropped from 9.0 to 5.8 and Zambia from 7.6 to 5.2.

We also correctly projected that Ghana would be the worst performer in 2022 – the country rating increased from 3.2 in January 2022 to 7.8 a year later, which is mostly due to sovereign debt concerns and civil unrest risks. The two other identified losers of 2022, Mali and Tunisia, saw a similar deterioration in their respective country risk outlooks. Moreover, we are assured in our pick of Ethiopia as our country risk wildcard for 2022, as the country’s rating has significantly improved on the back of the peace process.

PANGEA-RISK presents its three “winners” and three “losers” of 2023, as well as a new wildcard for the coming year.

1. Nigeria: Things could arguably not get any worse for Africa’s largest economy, or at least, we anticipate. All three major candidates for the February 2023 presidential election agree on the need for extensive structural reforms to be implemented. These include privatisations of state companies and assets, exchange rate reform to replace the distrusted multiple exchange regime, phasing out the ludicrously expensive and inefficient fuel subsidy, and some form of debt restructuring of both unaffordable domestic bonds and rapidly growing foreign loans. All candidates agree to boost economic growth, cut inflation, and attract foreign investment. Obstinate central bank policies and harsh political realities may hamper some of these campaign promises, but at least Nigeria’s ruling class agrees on the best way forward after the elections. Even the central bank is widely expected to devalue the currency by the steepest margin in six years by the second quarter. 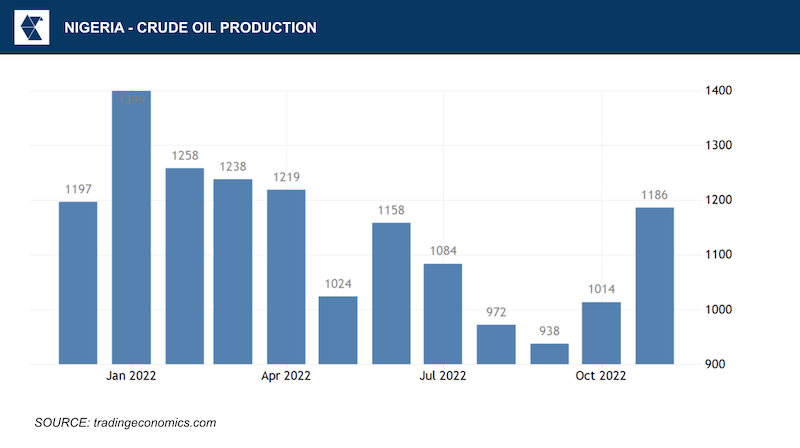 The big candidates also agree to decentralise the security forces to allow state and municipal authorities more control over their own security. This is a positive development in a country where federal soldiers are deployed in almost all 36 states. If left unchecked, insecurity will spread southwards, as indicated by the recent Edo State mass kidnapping on a train. Some early successes should be noted in the oil sector, where Nigeria has partially reversed a long-term slump by cracking down on oil theft. The government has revived production from record lows by hiring security companies linked to former rebel leader Government Ekpemupolo, who runs armed gangs and private security companies in the oil-producing Niger River delta region. As a result, Nigeria’s crude output increased by 150,000 barrels per day late last year. The country has many remaining obstacles on its road to recovery, but the early indicators for 2023 are notably brighter than previous years.

2. South Africa: The Johannesburg Stock Exchange index is at an all-time high, driven by optimism on a Chinese reopening. Last year, the economy not only avoided recession but exceeded expectations. South Africa’s net reserves are rising, while last year’s metals price boom has brought in windfall revenues, which is giving the government some free rein to bail out cash-strapped state-owned enterprises and extend much-needed social welfare support. Foreign investors are returning to South Africa, while the local rand currency is no longer beset by previous levels of volatility. The state is also limiting borrowing and stabilising its debt position. The economic outlook for 2023 is significantly better than the previous three years, although all forecasts hinge on political developments. 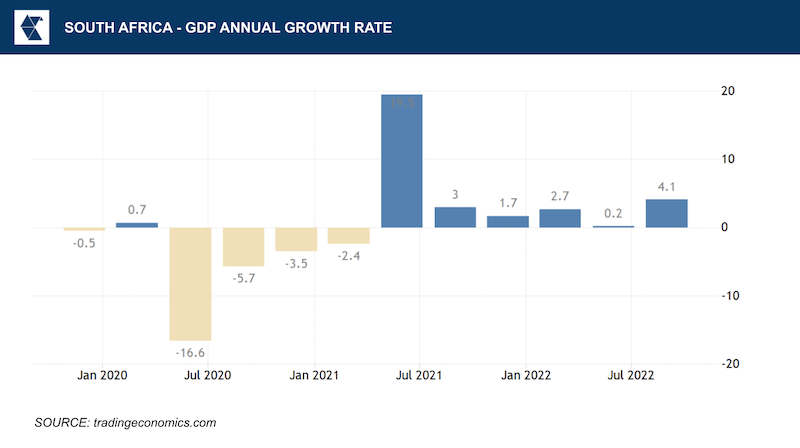 South Africa’s reform-minded and pro-business President Cyril Ramaphosa consolidated his authority over the governing party in late 2022 and he must now implement long-promised reforms to curb corruption, boost economic growth, and roll back power outages. The year 2023 may be the last opportunity for the long-time ruling African National Congress (ANC) party to reverse the country’s economic decline and deteriorating security outlook. Nonetheless, the country’s economic trajectory remains subject to considerable uncertainty, particularly with at least another two years of regular blackouts forecast projected due to a sustained electricity supply shortfall, criminal activity, and lack of investment in the power grid. A repeat of the July 2021 devastating riots seems improbable in coming months, although insecurity has been on the rise in most parts of the country. 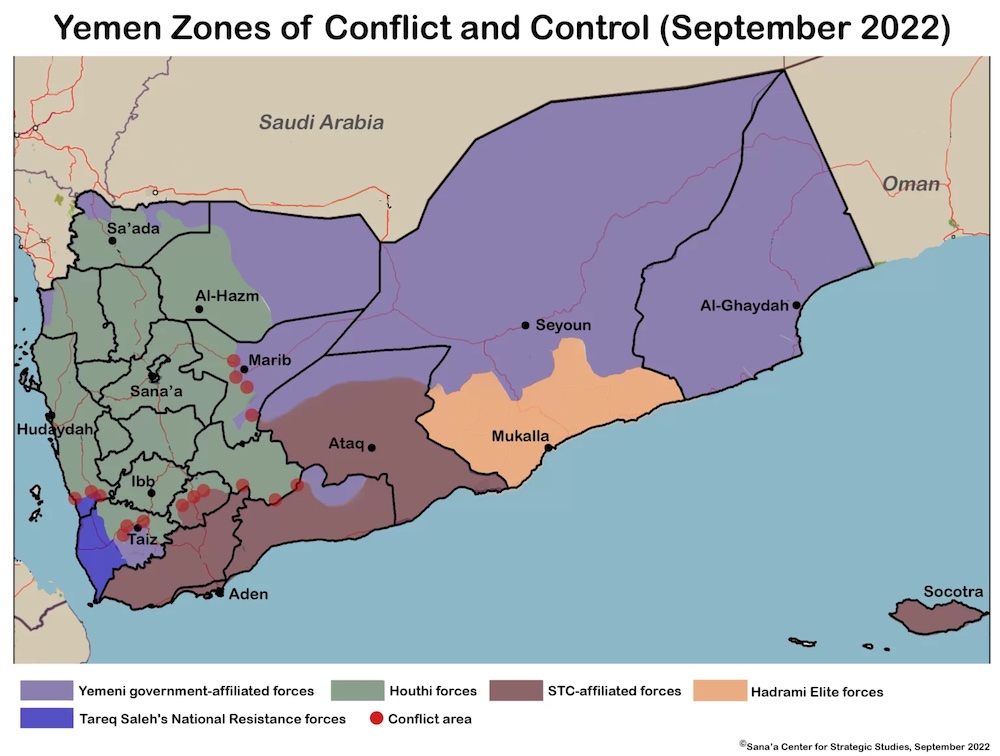 3. Yemen: An April 2022 truce has not been formally renewed, although the ceasefire seems to be mostly holding. During its implementation, Yemen has witnessed the longest period of relative calm since the country’s civil war began in 2014. During this, there has been a significant decline in casualties, increased fuel imports into the Houthi-controlled Red Sea port of Hodeidah, and the resumption of some commercial flights to and from Sana’a airport. The countrywide halt to offensive military operations has led to a 90 percent reduction in the reported fatalities associated with confrontations between the Houthis and forces loyal to the Internationally Recognised Government (IRG), compared to the six months before the truce. The mechanism set in place by the United Nations has provided important channels of communication to de-escalate the conflict, although it does not tackle drivers of violence at a micro level.

The truce and improvement to the foreign exchange market have contributed to greater macroeconomic stability since April last year. An extended ceasefire in Yemen could allow some economic activity to resume, with stronger growth ahead in 2023. There are some positives linked to the easing of regional tensions, which could allow hydrocarbon exports to resume (thus shoring up the currency), though this will be contingent on further progress in peace talks, which remains uncertain. Yemen might be a far stretch to project an improvement in the country risk rating in 2023, but the economic and security indicators are showing a potential turn-around in one of the world’s deadliest conflicts. 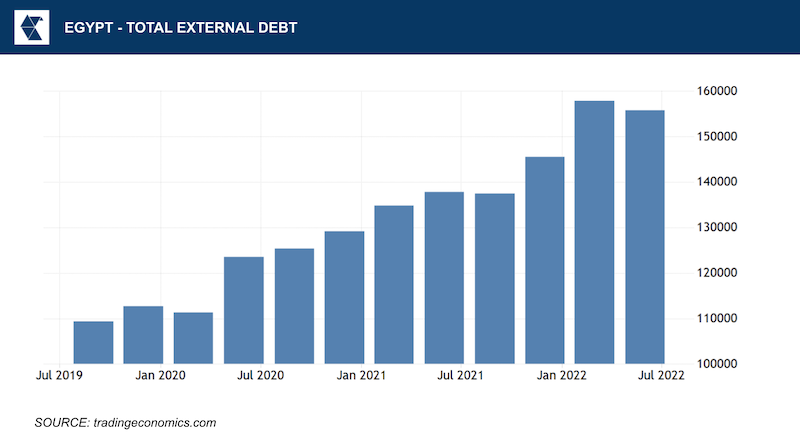 1. Egypt: Egypt’s debt-fuelled economic boom peaked in 2022 and will become more volatile in 2023. A low value IMF loan agreed last year will likely have some positive effects on the current account deficit, but financing risks will persist. Import suppressions and lower global commodity prices, together with strong gas exports, a resilient tourism sector, robust receipts from the Suez Canal and rebounding remittances will help the external deficit narrow. On the other hand, risks reflect the deterioration in Egypt’s external liquidity position and reliance on Gulf funding for bond market access, leaving the country vulnerable to adverse global conditions at a time of high external debt maturities. The materialisation of any of these risks would weigh on the external position and the currency.

Investors’ risk perception vis-a-vis Egypt will likely only recede once the external environment becomes more accommodative and Gulf investments start materialising later in 2023. Foreign investors have pulled USD 22 billion from the local debt market since March 2022. It remains unlikely that growing economic grievances will stoke unruly demonstrations thanks to the high likelihood of security forces breaking up any unapproved gatherings. 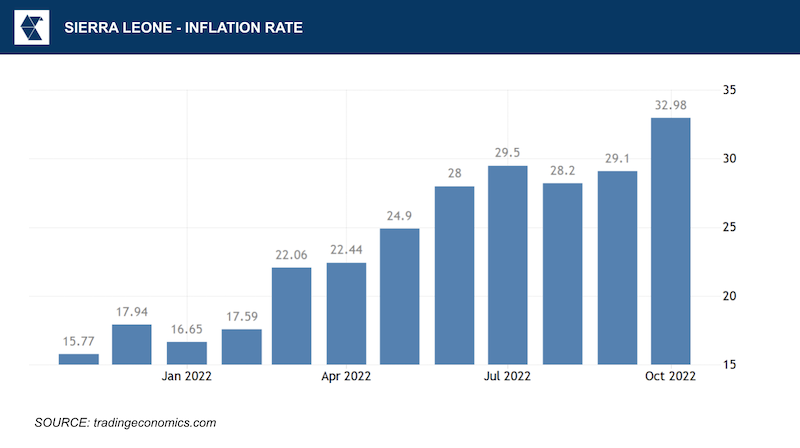 2. Sierra Leone: Inflation hit over 43 percent in November 2023 and is projected to accelerate further in early 2023, with record high food and fuel prices disproportionately driving the basket of inflation indicators, as well as disruptions in the global supply chains and high freight charges. Local factors contributing to the deteriorating economic outlook include economic mismanagement, corruption, and rising insecurity. As the opposition attempts to capitalise on Bio’s unpopularity, the coming months will see a heightened likelihood of incidents of political violence, primarily manifesting in the form of isolated skirmishes between rival party supporters.

The threat of food-related unrest remains particularly high since the mid-2022 riots that the government called an opposition-led insurrection. Since those riots, inflation has continued to soar. Politically and ethnically charged rhetoric has reversed some of the gains of the peaceful transition of power in 2018. If the government’s policy agenda stalls or the economy falters, sporadic outbreaks of localised violence between partisan supporters and security forces will remain particularly likely in Freetown, Bo, Kenema, Kono, Pujehun, Kailahun, and at Tonkolili mine.

3. Jordan: The kingdom ended 2022 with an outbreak of violent unrest due to rising fuel prices, causing riots, killings of protesters and police officers, and a social media ban. Jordan has a history of protests over food and energy prices. In 2018, King Abdullah ordered a freeze in fuel and electricity prices after widespread demonstrations. With some global commodity prices, such as oil, reaching highs that have not been seen in about a decade, it is likely that the government – which is already facing high fiscal deficits – will have no choice but to pass on the impact of elevated commodity prices to Jordanians. Growing unemployment (standing at 23 percent) and any suggested austerity measures affecting subsidies, wages, and benefits will drive anti-government protests. 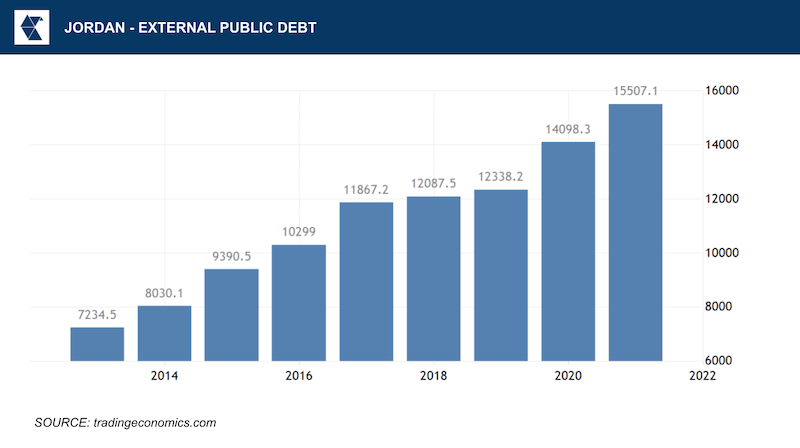 Gross external debt has risen to worrisome levels in relation to GDP (92 percent forecast for 2022) and export earnings (more than 300 percent), driven by deficits on both fiscal and current account accounts. Moreover, foreign exchange reserves cover only about 95 percent of the maturing external debt over the next 12 months (short-term debt plus principal repayments due on long-term debt), compared with a benchmark “comfort” level of 125 percent. Aid from Gulf countries, which are focusing on their domestic economies in the aftermath of the coronavirus pandemic, is likely to be limited despite high oil revenue. Aid inflows from major western countries will also probably remain constrained, with many focused on the conflict in Ukraine and their domestic economic recoveries. This will leave the Jordanian government in a precarious financial position over the coming 12 months. 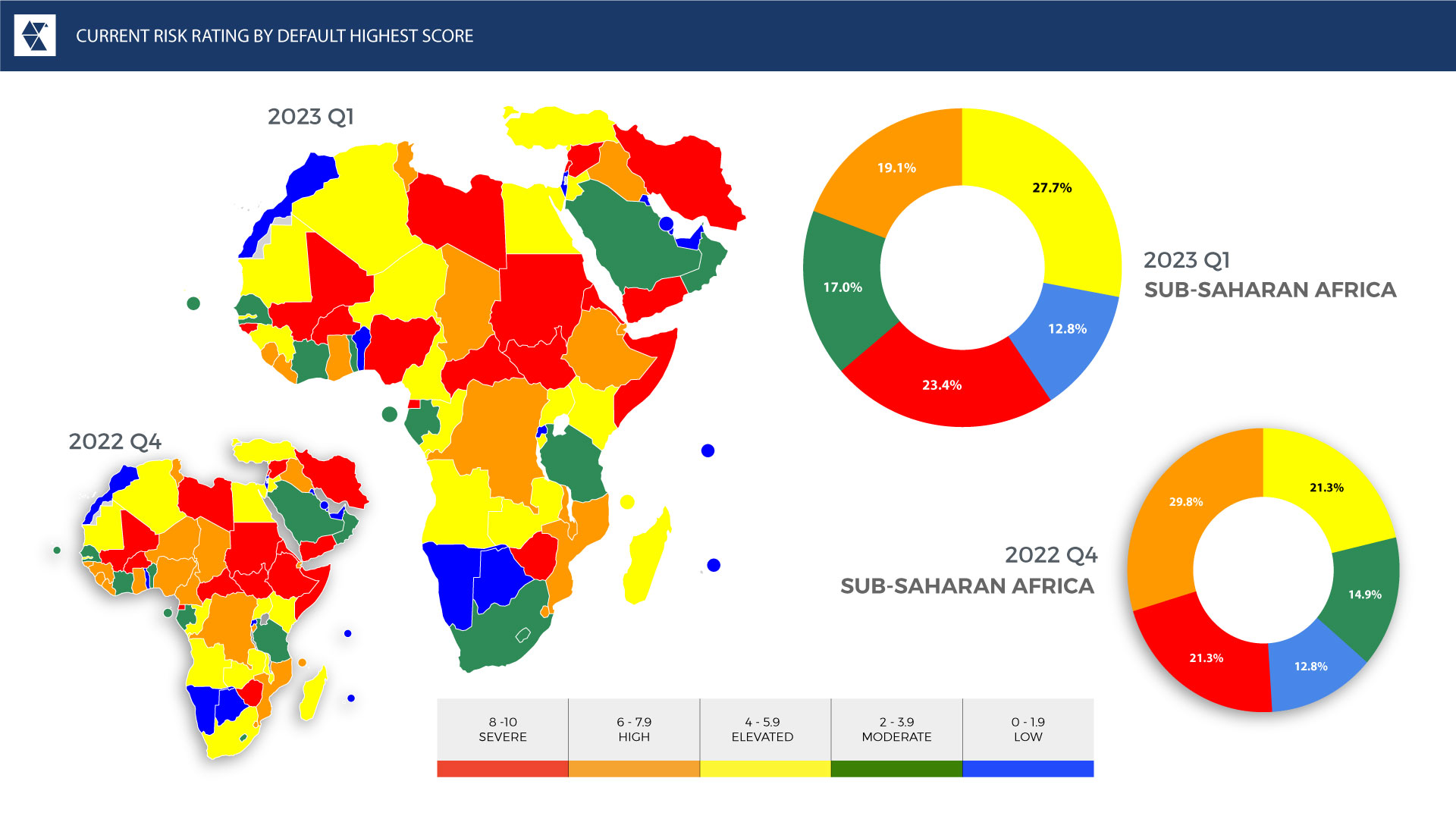 Our country risk wildcard for 2023 is Sudan, where years of political instability, insecurity, and economic decline may be turning around. The 2022 landmark political transition deal prepares the way towards elections by 2024, although there remain many obstacles to implementation and several influential Sudanese stakeholders remain opposed to the deal. Protests by resistances committees, as well as opposition from armed rebel groups and Islamist parties, will drive disapproval of the transition, which will continue to raise the threat of civil unrest and political instability well into 2023. 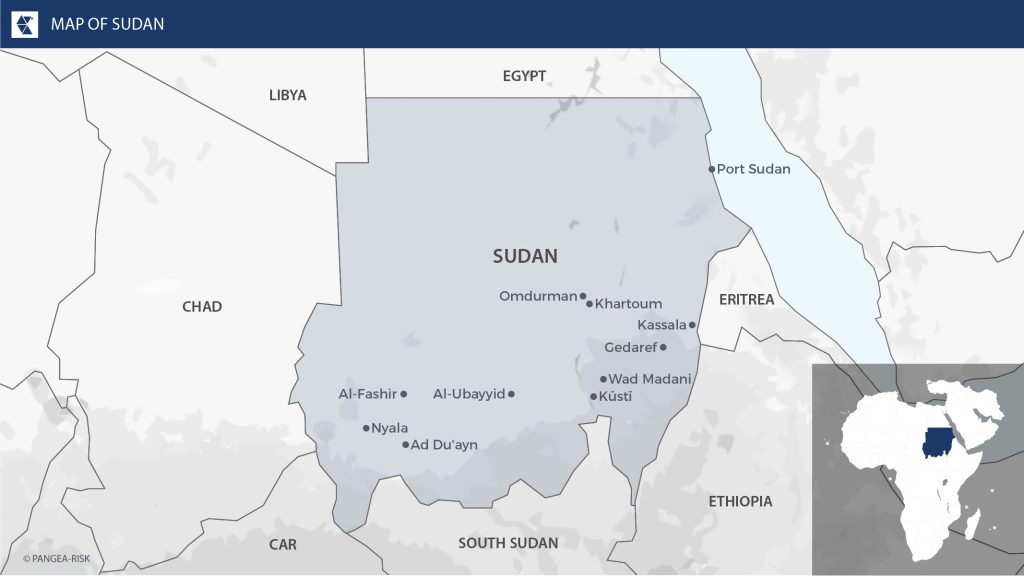 Nevertheless, the transition deal is supported by Sudan’s main international partners in the Quad and should unlock both western and IMF economic development aid and financial support, as well as investments from the Gulf region. This was illustrated in late 2022 by a USD 6 billion ports investment deal with the UAE. Indeed, hopes for an economic recovery and resumption of aid flows into 2023 have brightened as the military has agreed to transfer power to a civilian government in coming months.